After celebrating Mass on March 26 at his parish in , Msgr. Daniel Mueggenborg saw he’d missed a call from an unknown number. He almost didn’t check the message, figuring it was a telemarketer.Actually the call was from the ’s Apostolic Nuncio to the , who told him to sit down: Pope Francis had appointed him an auxiliary bishop for the Archdiocese of Seattle.

“I was very surprised, but also “filled with a sense of … enthusiasm and excitement”, he later said.  “I am humbled by Pope Francis’ appointment to serve as an auxiliary bishop in the Archdiocese of Seattle. “These recent days have been filled with prayer both in gratitude for the Holy Father’s decision and in petition for the strength and grace to fulfill the duties of this ministry.”

“It is with deep joy that I share this good news,” Archbishop J. Peter Sartain said “His warmth and affability, coupled with his pastoral experience and competence, will be great gifts to the Archdiocese of Seattle.” Archbishop Sartain has known Msgr. Mueggenborg since his time as bishop of , , next door to . 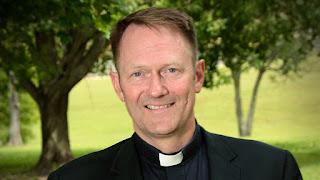 Msgr Mueggenborg, 55, was born in on April 15, 1962. Growing up he participated in Boy Scouts of America, eventually receiving the Eagle Scout Award.

One early event in his life, which impacted him greatly, he said, was meeting Bl. Stanley Rother, a native of who was martyred while working as a missionary in , and is scheduled to be beatified in in September. (See BLOG March 15, 2017)

During his first year of college in 1981, Msgr. Daniel was asked to serve at Mass for the anniversary celebration of an aunt and uncle, which he agreed to, but only “reluctantly.” The priest saying Mass turned out to be Stanley Rother. Though he did not know who he was at the time, “it turned out to be one of the most pivotal decisions of my life,” he said.

“I was captivated by the deep spiritual presence that surrounded” Father Rother. There was a spirit of profound peace and love that filled the room when he entered. He possessed the qualities of character that I desired most yet had not found in my secular pursuits of college life. As a result of that Mass I began allowing myself to once again consider the possibility of becoming a priest.”

Msgr. Daniel graduated with his Bachelors of Science in Geology from in 1984, then entered St. Meinrad Seminary in southern . After one year, he was appointed by his bishop to continue his studies at the Pontifical North American College in .

Other adventures during his college and seminary years included two missionary trips, one to in Africa, where he had the opportunity to climb .

After his ordination to the diaconate, Pope  (St.) John Paul II invited the new transitional deacons from the North American College, with their parents, to an audience with him at the - a moment he will never forget.


During his time in , he  became very involved with the Missionaries of Charity, where he met St. Teresa of . Though it started as just a weekly commitment of one hour at their soup kitchen, his time volunteering with them eventually increased to much more.

After his ordination to the priesthood on June 14, 1989, he was asked to serve as a chaplain for their small convent at San Gregorio in . Mother Teresa was present at three of the Masses that year. After one of the Masses, she came to the sacristy and then joined the newly ordained priest and a classmate for breakfast.

“It was a remarkable experience to be in the presence of a woman who radiated the very presence of Christ,” he said.

Father Daniel received a License in Biblical Theology in 1990 and returned to . He served as parochial vicar and pastor at various parishes in the diocese, as well as chaplain of and Saint Philip Neri Newman Center at the .

In 2005 he returned to to serve as the Assistant Director of Formation at the Pontifical North American College, and then as Vice Rector of the college, from 2006-2011.

Since 2011 he has been pastor of Christ the King Parish in .  In addition to English, he speaks Spanish and Italian.  He will be ordained a bishop at St. James Cathedral during a 2 p.m. Mass on May 31. Oklahoma's loss is our gain! 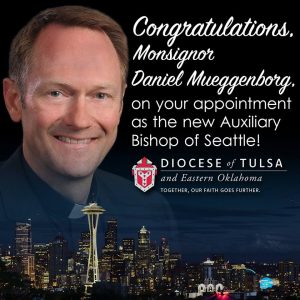 Posted by mother hildegard at 3:25 PM