As we hit summer with soaring temperatures, our skin can take a beating from the sun and insects. For myself I would rather have pain than an itch. I am reminded of this holy nun of our order who suffered much, and gave it all for others.


SERVANT of GOD SISTER MARY ANNELLA ZERVAS was born in in 1900.  She was an American Benedictine nun who died after a three-year battle with the skin disease Pityriasis rubra pilaris. Prior to the 1960s, Sister Annella's grave in  was considered a place of pilgrimage. 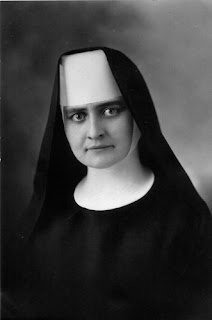 Her father, immigrant from the  of Immekeppel, , was a butcher and ran a local meat market. Her mother, Emma was born in Saint-Theodore-d'Acton, .

Anna was raised as part of a large family which attended St. Mary's Roman Catholic Church in , where her father was the choir director and a member of the Knights of Columbus. At the time, the parochial school from St. Mary's was looked after by priests and nuns of the Benedictine Order. According to Father Alfred Mayer, O.S.B.,"She sought only to please God and do His Holy Will in all things, and thence labored but for God's honor and glory. She sought to please God by an ardent desire and an earnest will to acquire virtue and perfection, a total renunciation and forgetfulness  of the world and its vanities, and an invincible fortitude in her sufferings... It was during the summer vacation of 1915 that she one day called on me and expressed to me her desire of going to the convent at  and becoming a sister. I told her that I thought she had a religious vocation and advised her to carry out her holy design. She seemed to be so convinced of her religious vocation that she expressed no doubts or fears regarding it. After I had spoken some words of encouragement and explained to her, in short, the excellence of the religious state, she left happy and contented."

Hubert and Emma Zervas were reportedly very reluctant to part with their daughter at such a young age. Father Alfred, however, advised them, "Don't put anything in her way; she is not too young to give herself to God." Hubert Zervas wrote several years later that he and his wife had then "gladly consented to give back the child to Him from Whom they had received her."

Anna entered Saint Benedict's Monastery as a postulant in 1915 and entered the novitiate in 1918. She was remembered as a quiet and unassuming nun who was fond of reading The Following of Christ by Geert Groote.

In 1918, she received the habit in a ceremony conducted by Bishop Joseph Francis Busch of . This was the day which Anna had so eagerly awaited; in a simple, beautiful ceremony, she exchanged her bridal gown for the religious habit. Her expression of happiness upon returning from the sanctuary that day was termed 'angelic' by one eyewitness.

Anna rushed to tell her parents her new religious name, Sister Mary Annella. Her mother remarked, not unkindly, 'But there is no Saint Annella,' to which Sister Annella, concealing her slight disappointment at this reaction to the name by which she would henceforth be known, replied, 'Then I shall have to be the first one!'"  She took her final vows in 1922 and was assigned as a music teacher and organist to St. Mary's Convent in .
During the summer of 1923, Sister Annella noticed a small reddish brown patch on her arm which itched terribly. Despite attempts to quietly bear the disease, the spreading rash soon proved impossible to conceal and soon covered the majority of her body. 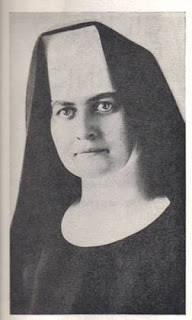 In April 1924, her parents were summoned to her hospital bedside. When her mother reached the door, she looked in, but she said, ‘I looked in and I saw someone’s head on the pillow and I thought, oh, it can’t be.’ She didn’t even ask, she just turned to Sister Annella and said, ‘Excuse me, I got the wrong room.’ And Annella broke down; she just screamed, ‘Mama, don’t you know me?!’ Mother said never could she have dreamed that she could change that much in that time. She said she though she was seeing an old man. Her hair was nearly all gone and her face looked terrible, blotchy. She said, ‘I couldn’t ever believe that my Annie could look like that.’

After their shock wore off, Hubert Zervas recalled, "Her parents were highly edified at her composure, her resignation to her condition… [and] her joyful bearing of an affliction sent by a loving . They remained with her two days, and had many good laughs at Sister Annella’s witty remarks."
In June 1924, Sister Annella was transferred to the Mayo Clinic in . According to Brendan D. King,

In , the doctors noticed that, as she undressed, Sister Annella’s skin was exfoliating in a manner similar to falling snow. After carefully comparing her symptoms against the rare diseases in obscure medical textbooks, the doctors reached a verdict. Sister Annella was suffering from Pityriasis Rubra Pilaris, a skin condition so rare that only six other cases were known to exist in the entire . P.R.P., as it is known for short, is an inherited disease usually passed down from parent to child. In the most serious cases, the skin becomes overactive and is unable to regenerate. The blood vessels dilate, which causes the body to hemorrhage moisture. This leaves the weakened immune system quite vulnerable to secondary infections. In some cases, P.R.P. can be fatal.

After her diagnosis, Sister Annella was transferred to the , where all skin diseases were treated. She was given a great deal of rest and fed a special diet consisting mainly of fish and vegetables. Every one of her nurses expressed revulsion at the task of changing her bandages and asked to be reassigned. There was little improvement, however. Sister Annella’s skin had grown so sensitive that lukewarm water seemed scalding hot. By the beginning of June, a grayish purple coloring began spreading outward from her face. Even hot packs could not stop her teeth from chattering. With the period of examination over, Sister Annella was transferred to St. Raphael’s Hospital in .
During the worst fits of pain, however, Sister Annella would repeat, "Yes, Lord, send me more pain, but give me strength to bear it.”

In the summer of 1924, with permission from the Mother Abbess,  the Zervases took Sister Annella home to care for her.  This in no way altered her status as a religious sister, as the abbess remained carefully informed of Sister Annella's condition. Furthermore, the Benedictine nuns visited regularly, regarding Sister Annella as a part of their community.

In the fall of 1924, careful dieting and osteopathic treatments brought about a remission of Sister Annella's symptoms. Her family was certain that it was only a matter of time before Sister Annella experienced a complete cure and the remission of her symptoms. Sister Annella, however, was unconvinced. She told her mother, “When this disease leaves me, God will have taken it away and he will not want me to have it anymore. I do not want anything but what God wills. God did not see fit to answer the Little Flower's prayer with a sudden cure. What He has in store for me, I do not know, but all He does is well, so there is no need to worry. God has given me the grace to be resigned, and I thank him heartily for this, but also for all else He has given me with my illness.”

In the summer of 1926, the disease returned full force. As a novena was offered for her at Our Lady of Victory Basilica in , her condition seemed to enter its final phase. According to Hubert Zervas,"Lying on her left side, her head slightly bent forward, her eyes partly open, her mouth... drawn in a faint smile, her knees bent, the entire form presenting a picture like the stations where Our Lord lies prostrate under the cross, Sister Annella peacefully breathed her last on the Vigil of the Feast of the Assumption of the Blessed Virgin Mary, August 14, 1926.

Within seven months of her burial at St. Benedict's Convent, Bishop Joseph Busch was hearing rumors of cures and favors granted through Sister Annella's intercession. He asked Father Alexius Hoffmann, OSB, St. John's Abbey, to collect information on 'the circumstances of her sickness and death and the origin and progress of the cultus, if any, in her regard and any evidences there may be of miraculous intervention through her intercession.

"In April 1927, Father Alexius reported to Bishop Busch that five cures had been reported. He also submitted a biographical sketch written by Sister Annella's parents. While there is no evidence that Bishop Busch took further steps in the case, devotion to Sister Annella spread through the efforts of her father and a priest from St. John's Abbey, Father Joseph Kreuter, O.S.B.  Interest in Sister Annella dwindled during the 1960s, but she still has some fans. At least one of them, no one seems to know who, puts flowers on her grave regularly.

Posted by mother hildegard at 10:29 AM