Our Last Blog dealt with a member of Maryknoll.  This Blog  introduces the foundress of the women's branch of that missionary order.

SERVANT of GOD MOTHER MARY JOSEPH ROGERS was born in , in 1882. Mollie was the fourth child and first daughter in a family of eight. Mary Josephine attended public schools in , then in , where she specialized in zoology, graduating in 1905. She also spent a year at in a special program for college graduates that earned her a teaching certificate. After two years at , where she was an assistant in the biology department, she taught in ’s public schools, at both the elementary and high school levels. 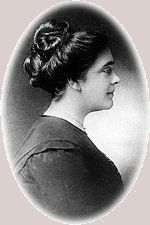 At the suggestion of Elizabeth Hanscom, a faculty member, and with the encouragement of the Rev. James A. Walsh, director of the Society for the Propagation of the Faith in , Mary Josephine organized a Mission Study Club for the college’s Catholic students in 1906. From 1908, when she returned to until 1912, she devoted her spare time to assisting Father Walsh in the work of mission education–editing, translating and writing for The Field Afar, a mission magazine begun by Father Walsh in 1907 and now called Maryknoll.


In 1911, Father Walsh and Father Thomas Frederick Price, a seasoned home missioner in , were commissioned by the Bishops of the to begin a seminary to train American young men for mission service abroad. Later that year, they went to to make their foundation, the Catholic Foreign Mission Society of America, more commonly known as the MARYKNOLL Fathers and Brothers.

Mary Josephine was not able to go with the first small group of three women who offered their services to the young organization. But in September 1912, when the family obligations that prevented her from leaving had been satisfied, she joined them in their temporary home in .


Mary Josephine was chosen by Father Walsh and the “secretaries,” as they were called, to direct the group under Father Walsh’s guidance. She continued in that capacity until 1920, when the group, then numbering 35, was recognized as a diocesan religious congregation: the Foreign Mission Sisters of St. Dominic, generally called the Maryknoll Sisters.


At the first General Chapter in 1925, Mary Josephine was elected Mother General. Mother Mary Joseph (her religious name) was re-elected to that office at subsequent General Chapters until her retirement in 1946 at the age of 64.  At that time the Congregation numbered 733, and the Sisters were working in , , , the , , , and , as well as with ethnic and racial groups in the . When she sent the first sisters to on mission, she followed them spending several months immersed in the culture, experiencing the hardships, and learning firsthand the ways of a new culture.

From the beginning, she accepted sisters from any culture of the world where Maryknoll worked. That represented an amazing openness to other races and cultures for the time.

The reverence and esteem for Mother Mary Joseph extended far beyond the religious community she founded, as is shown by the honorary degrees which were bestowed on her: Doctor of Laws by Regis College in Boston in 1945 and Trinity College in Washington D.C., in 1949 and Doctor of Letters from her alma mater, Smith College, in 1950.

Posted by mother hildegard at 9:57 AM