AMERICAN FOUNDRESS - CARE OF THE LAPSED

SERVANT of GOD MOTHER MARY TERESA TALLON is another American born woman, we hope soon to be added to the roster of  saints. One of the things I love about her is her emphasis on bringing lapsed Catholics back to the Church. - a passion of mine!  In a monastery we each have our gifts. For Mother Catarina is  it is evangelization- for me it is taking care of the Catholics! 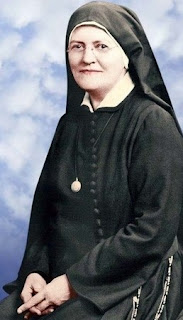 Julia Teresa Tallon was born on a farm in the near the city of , New York in 1867 as the seventh of eight children to the Irish immigrants Peter Tallon and Bridget Duffy.

Regardless of their opinion she joined the Holy Cross Sisters int in 1887 and resided with the order at their convent until 1920 after the conclusion of World War I. For thirty-three years she remained with the Sisters teaching a variety of subjects in Catholic schools. Little did she know that God was preparing her for another aspect of religious life - the founding of a contemplative-missionary Congregation for the streets and homes, to teach the faith and counsel, and especially to reclaim lapsed and uninstructed Catholics.

On the feast of the Assumption, August 15, 1920, when she arrived in to begin this work, the Parish Visitors of Mary Immaculate were born. She had left the Holy Cross Sisters after obtaining approval from the appropriate ecclesiastical authorities. 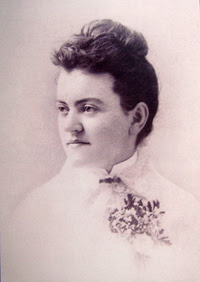 Though quiet and retiring by nature, she was strong-willed and courageous (necessary qualities for any foundress), as well as intelligent and reflective. Even as a young girl she was seen to be magnetic, compelling and persuasive. People were drawn to her and held by her fervor and enthusiasm, especially for the things of God.

Her books, personal letters, and numerous printed articles show a deeply loving religious  who was unflinchingly staunch and loyal to the Church’s teaching, to the Holy Father, and to the mission God had given her.

In spite of suffering from disabling illnesses in the final two decades of her life Mother Mary Teresa  carried on the administration of the Congregation, hiding from most who knew her the severity of her illness.

On 10 February 1954 she was critically ill after suffering a fall in her room and spent the next month in pain. She died on the evening of 10 March 1954 just as her community concluded the recitation of the rosary at her bedside.

Before she died she said, “I leave everything in God’s hands, who gave the wonderful vocation. He can give it to someone else as He gave it to me—and more effective than in me … As for me, I’ll be glad to go to God and under Him care for you all. He loves you more than I do.” 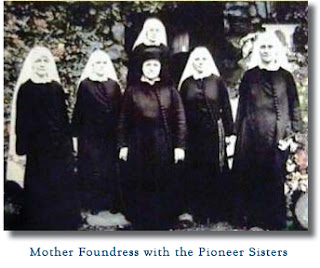 The beatification process opened in the Archdiocese of New York on 20 February 2013 under Pope Benedict XVI.
Posted by mother hildegard at 4:08 AM