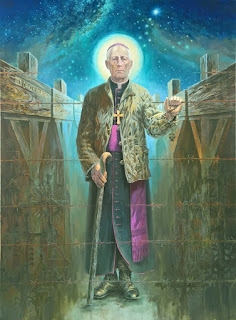 June of this year was given a new saint when ARCHBISHOP TEOFILIUS MATULIONIS was beatified.
(Painting by the Polish artist  Zbigniew Gierczak, shows him in his bishop's garb under his prison uniform.)

He suffered repeated imprisonment by Soviet communists during his lifetime. While residing in , he witnessed the horrors of the Bolshevik Revolution in 1917, but continued to live in the city then renamed . In 1923 Father Teofilius was arrested and sentenced to three years imprisonment for refusing to cooperate with the communist authorities. In 1929, Bishop Anton Maleckis secretly consecrated Father Teofilius bishop. That year Bishop Matulionis was arrested again and sentenced to 10 years in a concentration camp in the , .

After four years of hard labor and subsisting on starvation rations, he was released as a part of a prisoner exchange between and the . from 1933 until 1940, He was appointed as ordinary of the Diocese of Kaišiadorys, from 1933 until 1940. During that time he also traveled abroad, visiting , the Holy Land, and the major Lithuanian parishes in the . While in , he blessed the monument to the Lithuanian pilots, Steponas Darius and Stasys Girėnas, which was erected in ’s and remains there to this day. He spent 18 months in the .

With the occupation of by the Red Army in 1940, he faced further persecution. In December of 1946, he was arrested and imprisoned in the notorious Vladimir Prison and later exiled in Mordovia. He was eventually released in 1956 but was not allowed to resume his duties or even to return to his own diocese. He took up residence in Birštonas.

In 1957, he secretly consecrated Vincentas Sladkevičius bishop. For this “transgression,” the Soviets further exiled him to the town of Šeduva.

Pope  () John XXIII bestowed the title of  Archbishop to Teofilius Matulionis in 1962 and also extended to him an invitation to attend the Second Vatican Council. That same year, after a police raid of his apartment, Archbishop Matulionis died under suspicious circumstances. His remains were exhumed in 1999 and tests confirmed that he had been poisoned with a lethal injection.

On December 1, 2016, Pope Francis declared that Archbishop Matulionis had died “in odium fidei” (in hatred of the faith) and thus approved the process of his beatification, allowing it to proceed. The miracle required for beatification is waived in cases of martyrdom, since martyrdom itself is deemed to be a miracle of grace.

Bl. Teofilius  is characterized by his especial loyalty to the Church. Although he  constantly faced  persecution, he never compromised his faith. He trusted in God and persisted in following God’s will, regardless of  the circumstances in which he was placed – prison, concentration camps, exile, his home diocese or abroad. He was a living example of the Christian faith for everyone.

In an April 13 pastoral message, the Lithuanian bishops' conference said Archbishop Matulionis had "lived the Easter message" and that he had consistently shown "peace, confidence and goodness," even to his persecutors.

Archbishop Grusas said the martyred prelate had "offered up his sufferings for the conversion of ," while also "moving the church forward" by instructing clergy to remain with their flock even if it meant persecution and exile.  He suggested that Archbishop Matulionis invitation from the pope to attend Vatican II appeared to have been the "last straw" for 's Soviet rulers.

The last Lithuanian to be beatified, Bishop Jerzy Matulewicz-Matulaitis, who lived from 1871 to 1927 and was the founder of the Sisters of the Immaculate Conception, was declared blessed in by St. John Paul II in 1987.

The church also is seeking the beatification of Bishop Vincentas Borisevicius, who was shot in 1946 for alleged links with underground fighters, and Archbishop Mecislovas Reinys who died in a Russian prison in 1953.

Archbishop Grusas said, however, that beatifications had been delayed by a lack of canonically trained experts in the Lithuanian church following Soviet rule. He said with recent funding and technical support he hoped the cases of other martyrs could be brought forward.

"We're dealing with recent history, but as we rebuild our church, we're gaining the resources and expertise we need.”

Posted by mother hildegard at 10:47 AM