ANOTHER BLESSED FOR PRIESTS

Amazing how working on the life of one saint leads us to another. Sometimes I think they gather in Heaven discussing who needs to be noticed next!  Another woman who devoted her life to the sanctification of priests was BLESSED MARIA TERESA CASINI, foundress of the Oblate Sisters of the Sacred Heart of Jesus.

She was born in  aristocracyin 1864. A contemplative and apostolic soul who was favored by profound mystical experiences, she understood the plea of the Heart of Jesus to offer her life as an oblation of prayer and reparation to support priests.

On the day Teresa had made her First Communion, she was in the family chapel of her home when she looked at the crucified Jesus on the cross and was moved to tears thinking about the suffering and abandonment He had suffered. The wounded Heart of Jesus pierced by a thorn flooded her mind. That memory defined the thrust of her life from that day on, and she was driven by her devotion to the Sacred Heart of Jesus.

She traveled to Rome for her studies at the Santa Rufina boarding school that the nuns of the Madams of the Sacred Heart conducted.  Due to a period of ill health, she had to leave school and return home for recuperation.

Shortly after she turned eighteen, she responded to her vocation and met Father Arsenio Pellegrini who became her guide and her spiritual director and who served as the Abbot of the Basilian Monks of Grottaferrata. Despite entering the convent, ill health forced her to leave, though she attempted to enter once again yet failed due to the death of the foundress after which the institute she joined ceased to exist. 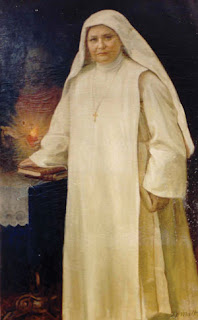 In due time, she became a nun after entering the monastery of Sepolte Vive in on 2 February 1885. She only started to live in Grottaferrata with fellow entrants in 1892. In 1894, she founded the Oblate Sisters of the Sacred Heart of Jesus for the purpose of praying for holiness for priests, assisting them in their ministry and promoting new vocations.

It was not until 1925 that she started the special work of the "Little Friends of Jesus" in order to promote and to cultivate the vocations of prospective priests.   As time went on, the Oblates responded to requests from pastors in parishes to help them in their rectories and schools of religion. This led to filling the urgent need for homes for priests recuperating from serious illnesses, for retired priests and for those working outside the parish.

Throughout her life, she offered "the oblation of herself, in faithful response to the Love that overflows from the open Heart of the Savior, and which she imparted to so many daughters and priests". This even earned the praise of Pope (St.) Pius X in 1904 who wrote: "In order to bring about the reign of Jesus Christ, nothing is more necessary than the sanctity of the clergy. God bless these sisters for their selfless love for these men of God, for through them, through the sacraments, we are fortified and purified for the journey".

Bl. Maria Teresa suffered a stroke in 1925, and a more severe one two years later. She remained bedridden for the rest of her life, while directing the Oblate Sisters of the Sacred Heart of Jesus from her bedside. She went to her eternal reward in the early morning of April 3, 1937, in Grottaferrata.