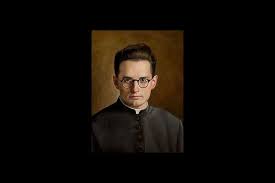 On Nov. 8, 2017, Pope Francis declared the martyrdom of SERVANT of GOD JANOS BRENNER, thus clearing the way for his beatification. Janos was born in 1931 in . Full of life and joy, he attended Catholic schools run by the Cistercian order, until the nationalization of schools by the communist government which came to power after World War II as part of the Eastern Bloc.

He felt called to the Cistercian order and after applying to enter, and was accepted as a novice in Zirc in 1950, and took the name Br. Anastasius. However, only a few months after he began formation, the communist government began suppressing religious houses. To protect the men in formation, the novice master moved the young brothers from the abbey to private apartments, where they hoped to continue formation in secret.

It was around this time that Janos, along with a few other novices, moved to the local seminary to begin studying to become a priest, while continuing with his Cistercian formation through correspondence.

Despite the dangers and religious oppression going on around him, journal entries at the time display a deep trust in God and a strong desire to do his will.
He took his vows with the Cistercian order and then was ordained a priest in 1955.
Throughout his ministry, he was known for his willingness and readiness to serve and to sacrifice. Father Janos was especially talented at working with youth, which all the more made him a target of the communist government.

Even when he was made aware of personal threats against his life, and his bishop offered to transfer him elsewhere for his own safety, Father Janos responded: "I'm not afraid, I'm happy to stay."

On the night of Dec. 14, 1957, he was falsely called to give last rites to a sick person in a neighboring town, amid the reprisals for the Hungarian Revolution of 1956.

He left his home, carrying his anointing oils and the Eucharist, but was ambushed in the woods outside Rabakethely and stabbed 32 times. He was found dead the next day, still clutching the Eucharist in his hands, which has earned him the title of the “Hungarian Tarcisius.” (St. Tarcisius was a young third century martyr who was also killed while carrying and protecting the Eucharist.) 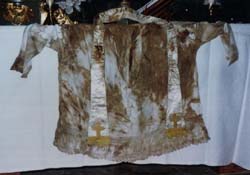 While the communists had hoped that Father Janos’s death would intimidate the faithful in the area, they could not stop devotion to the young priest’s memory. The Chapel of the Good Pastor was built in 1989 on the spot where he died, and is a popular place of pilgrimage for people throughout the country. The dirty and bloodied surplice he wore when he was killed has been preserved as a relic. 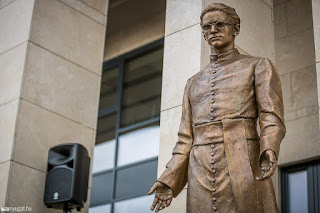 Posted by mother hildegard at 10:05 AM