Those of us who were fortunate enough to have  a real Jesuit education learned more than just the basics. We learned the Jesuit disciplines of prayer and a life-long love of learning. For me part of this love is in the search for things new that stimulate the mind and the soul. Readers of this Blog know how I like to discover and write about Jesuits, and here is a new one even for me.

DOMENICO ZIPOLI (October 1688 - January 1726) was an Italian Baroque composer who worked and died in Córdoba, in the Viceroyalty of Peru, Spanish Empire, (presently in Argentina). He became a Jesuit in order to work in the Reductions of Paraguay where he taught music among the Guaraní people. He is remembered as the most accomplished musician among Jesuit missionaries. 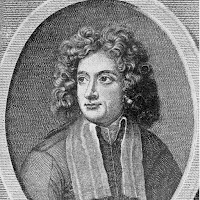 Domenico Zipoli was born in Prato, , where he received elementary musical training. In 1707, and with the patronage of Cosimo III, Grand Duke of Tuscany, he was a pupil of the organist Giovani Maria Casini in Florence. In 1708 he briefly studied under Alessandro Scarlatti in , then and finally in under Bernardo Pasquini. Two of his oratorios date to this early period: San Antonio di Padova (1712) and Santa Caterina, Virgine e martire (1714). Around 1715 he was made the organist of the Church of the Gesù (a Jesuit parish, the mother church for The Society of Jesus), in , a prestigious post. At the very beginning of the following year, he finished his best known work, a collection of keyboard pieces titled Sonate d'intavolatura per organo e cimbalo.

For reasons that are not clear, Domenico  traveled to Sevilla, , in 1716, where he joined the Society of Jesus with the desire to be sent to the Reductions of Paraguay in Spanish Colonial America. Still a novice, he left with a group of 53 missionaries who reached Buenos Aires on 13 July 1717.
He completed his formation and sacerdotal studies in Córdoba (in contemporary Argentina)  though, for the lack of an available bishop, he could not be ordained priest.

All through these few years he served as music director for the local Jesuit church. Soon his works came to be known in Lima, Peru. Struck by an unknown infectious disease, Domenico Zipoli died in the Jesuit house of Córdoba, on 2 January 1726. His burial place has never been found. 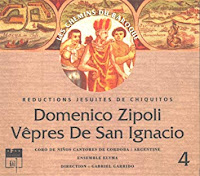 Domenico Zipoli continues to be well known today for his keyboard music; many of them are well within the abilities of beginning to intermediate players, and appear in most standard anthologies.

His Italian compositions have always been known but recently some of his South American church music was discovered in Chiquitos, Bolivia: two Masses, two psalm settings, three Office hymns, a Te Deum laudamus and other pieces.


Posted by mother hildegard at 9:59 AM