With all the racial tension/discrimination in our country, I am trying to find saints to pray to- who suffered either directly (Thea Bowman) or through those they cared for.

Our saint today  was one such man. ST. PETER CLAVER was a Jesuit missionary from during the 17th century, who was appalled by the slave trade and the living conditions of enslaved people. 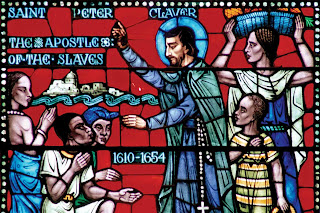 This holy man saw the  slaves as human beings, not animals, deserving the same respect and dignity that was given to anyone else believing that each one needed to hear the Gospel of Jesus Christ. He cared deeply about them and the salvation of their souls, exhorting them not to lose hope.

In caring for victims and survivors of slavery, he understood the need to address their physical needs thinking that providing food and medicine was often more effective to communicate the love of God than just preaching. He was quoted as often saying "We must speak to them with our hands before we try to speak to them with our lips."

Not only did he treat each with great dignity and compassion, he also protected them and interceded for them when he saw them being abused.  He tried to soften the hearts of traders toward their human cargo and  brought the slaves refreshment as soon as they reached port.  He insisted that European nobles line up behind them at his confessional.  By his own (probably conservative) estimate, St. Peter baptized 300,000 men and women. He ministered to them for 40 years  in  on ’s coast. 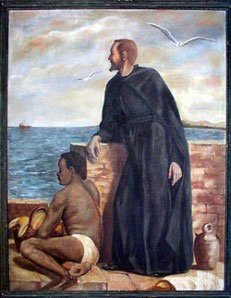 St. Peter Claver shows us that our actions speak louder than words. If we want true racial equality in the world, it must first begin with ourselves and how we treat others whom encounter on a daily basis.

Posted by mother hildegard at 11:47 AM