THE HORSEBACK PRIEST of ARGENTINA


BLESSED JOSE GABRIEL del ROSARIO BROCHERO (1840-1914) of ARGENTINA  was just beatified by Pope Francis. The ceremony took place in the small town of Cordoba Villa Brochero on September 14th of 2013 with 200,000 faithful attending.

He was known by the people as the gaucho priest ( I love these "horseback priests", such as Father Kino of Arizona). Bl. Jose first served as a priest at the Cathedral in Cordova, then in 1869 left for the town of Villa del Transito.  The area, immense in size (4336 square kilometers) consisted of valleys and mountains (6,000'), untamed and almost deserted, infested with robbers and fugitives. Its 10,000 poor inhabitants were scattered, with no roads, no schools, and no conveniences.

Here Bl. Jose gave his life for the needs of the people. With his hands he built churches, chapels and schools, and opened up roads between the mountains, dug canals and dams, encouraging people to join him.  He also established mail and telegraph services, opened a college for girls and brought nuns to educate. 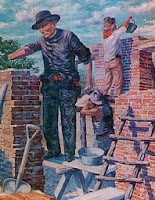 [Brochero] is a man of flesh and bones. He says Mass, confession, helps people to die, baptizes, blesses marriages, etc... Yet he is an exception: he practices the Gospel. Are you missing a carpenter? He is a carpenter. He rolls up his cassock, takes the shovel or hoe and opens a public road in 15 days, aided by his parishioners. He's all! and does it all with a smile, for the glory of God and the good of men, and all goes well done because it is done thoroughly. He did everything with his own hands! Miracle? No. The thing is very simple. It's a matter of honesty and willingness. In other words: it's a matter of taking seriously the apostolate, as done by the Cure Brochero.
(Passage of a newspaper article, 1887 Cordoba, compiled by Ms. Liliana De Denaro)


In his old age Bl. Jose fell ill with leprosy as a result of living with patients. Before his death he became deaf and blind.

His canonization process began in the 1960s. He was declared Venerable by Pope John Paul II in 2004. May 10, 2012, a medical board declared that the child's recovery from an automobile accident could not be explained. The child was near death with loss of bone of the skull and brain tissue. His father had asked Ven. Brochero to intercede for the life of his child Nicholas.

With his beloved mule and later horse (both"Malacara") he rode up and down the mountains and into the valleys, building and saving souls.
His spiritual achievements can not be measured in that stone desert place which now bears his name. 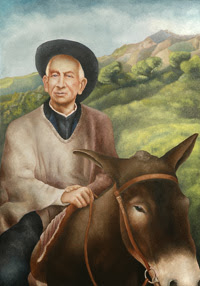 Posted by mother hildegard at 12:47 PM