BLESSED ZOLTAN LAJOS MESZLENYI, the second of five children, was born in 1892 in  , into a strong Catholic family. His father was a teacher and a school principal. He attended grammar school in Rimaszombat and began high school at a Protestant institution before moving to Esztergom and finishing at a Benedictine high school in 1909. 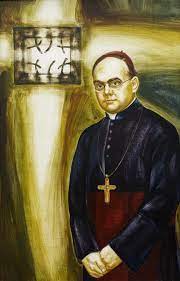 After graduation, his patron the archbishop of Esztergom, Kolos Cardinal Vaszary, OSB, sent him to to continue his education. As a pupil at the Collegium Germanico-Hungaricum, he studied at the where he earned a doctorate in philosophy in 1912 and a degree in theology in 1913. He also earned a degree in canon law.

As a citizen of the Austro-Hungarian Empire, ’s enemy during World War I, he had to leave during that conflict, which forced him to spend studying some time in . It was there on October 28, 1915, that he received holy orders at the hand of His Lordship Franz Egger, the prince bishop of Brixen (then in , now in ).

Upon his return to , he was appointed chaplain at Komárom, but a few months János Cardinal Csernoch called him later to Esztergom, where the primate’s chancellery entrusted him with more important tasks.

From 1917 to 1937, he held a variety of progressively important curial posts. Then Pius XI appointed him coadjutor bishop of Esztergom. All throughout this time, he continued his studies in canon law and authored a significant book on the subject and taught it, as well as a member of the theology faculty.

In 1945, Jozsef Cardinal Mindszenty became the new primate of , and he confirmed Meszlényi in every one of his offices. Many  know of this heroic and holy cardinal who opposed some of history's worst ideological gangsters. The communist state security apparatus arrested Cardinal Mindszenty on December 26, 1948, and convicted him after an obscene show trial. 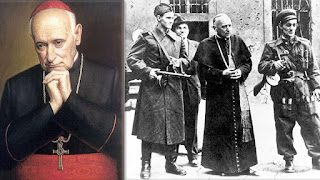 Bishop Meszlényi then became vicar of the archbishop of Esztergom, first because the chapter recognized his rectitude and firmness, and secondly because they refused to elect Nicholas Beresztóczy, the candidate promoted by the communist state. In his inaugural address as vicar, Bishop Meszlényi said, “Christ – because He is the faithful shepherd of the Faith and our Church – out of loyalty, we will not deny Him ever! So help me God.”

The communist regime could not forgive him being elected over their own candidate. On June 29, 1950, 12 days after his election, the communists arrested Bl. Zoltán and put him in the Kistarcsa internment camp, where he was kept in solitary confinement and tortured.

So began eight months of cruel captivity, consisting of starvation and lack of heating. Several witnesses claimed the communists forced him to live during the winter with an open window day and night. These hardships were exacerbated by forced labor and violence and unspeakable torture.

All the while no charges were brought against Bishop  Meszlényi. He was detained without trial. Furthermore the state machinery gave the public no news about the fate of the arrested bishop. It seems to have also subsequently erased by any documentation related to the arrest, if ever there was any.

Because of the torture and lack of medical care, Bishop Meszlényi died sometime between January 11, 1953, and March 4, 1954.

He was buried in an unmarked grave but exhumed in 1966 and his remains transferred to the cathedral in Esztergom.

His feast is March 4.

Posted by mother hildegard at 9:17 AM