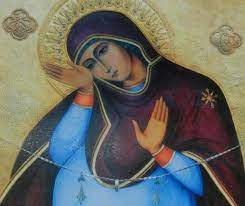 This 14 century fresco was discovered in a convent in in the late 20th century. The Virgin has just told Joseph about the baby to come. With her right hand raised to her head and wiping her tears, her left hand is pointing to Joseph that he is not the father. It is a mystery we do not usually associate with this happy time.

This Feast, which is now kept not only throughout the whole of but in almost all the Churches of the Catholic world, owes its origin to the Bishops of the tenth Council of Toledo in 656. These Prelates having thought that there was an incongruity in the ancient practice of celebrating the feast of the Annunciation on the twenty-fifth of March, inasmuch as this joyful solemnity frequently occurs at the time when the Church is intent upon the Passion of our Lord, and is sometimes obliged to be transferred into Easter Time, with which it is out of harmony for another reason – they decreed that, henceforth, in the Church of Spain there should be kept, eight days before Christmas, a solemn Feast with an Octave, in honour of the Annunciation, and as a preparation for the great solemnity of our Lord’s Nativity.

In course of time, however, the saw the necessity of returning to the practice of the Church of Rome, and of those of the whole world, which solemnise the twenty-fifth of March as the day of our Lady’s Annunciation and the Incarnation of the Son of God. But such had been, for ages, the devotion of the people for the Feast of the 18th of December, that it was considered requisite to maintain some vestige of it. They discontinued, therefore, to celebrate the Annunciation on this day; but the faithful were requested to consider, with devotion, what must have been the sentiments of the Holy Mother of God during the days immediately preceding her giving Him birth. A new Feast was instituted, under the name of the Expectation of the Blessed Virgins Delivery.

(source:  The Liturgical Year: Advent, by the Very Reverend Dom Prosper Gueranger, Abbot of Solesmes,  translated from the French by the Revered Dom Laurence Shepherd, Monk of the English-Benedictine  Congregation 1870)

Posted by mother hildegard at 9:37 AM