FRIENDS IN HIGH PLACES (A TRIBUTE to LARRY)

On Saturday my god-daughter and dear friend lost her husband Larry. Fortunately, it was a cancer that took him fast and while we all knew he would not be with us long, it is still a shock to all.
I suppose we are of an age where dear ones start to disappear from our lives, leaving only happy memories. 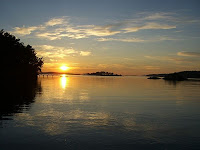 I have known Sandi and her sister Janet for over 20 years. We first met at a sheep fiber show, sitting next to one another on a  miserably hard bench. Someone came along and asked, are you all sisters, and I answered, yes, we are. That became the beginning of a great friendship. Their family is French and Czech and both women have the high cheek bones and beauty of the Slavs. Sandi and I have always resembled each other so it is easy to mistake us for blood sisters.


Janet came into the Church first, baptized here at OLR, followed by Sandi a few years later. After that Sandi and Larry's granddaughter, LaRen, and later grandson, Lucas, were baptized in our chapel.


Because Sandi was married, the marriage had to be blessed in the Church, which was done that same day. Many in the family came having a grand celebration with the Community sitting under the apple trees having a picnic.

Larry, who had been baptized a Catholic, but did not practice in his adult life, later said to me, well, I guess I may be next. I gave him a catechism, but we never followed through.The week before he died, Sandi called Father who came that Saturday to administer that last Rites. She said Larry was very happy and peaceful.

Some of my fondest memories of Larry are the annual trips over the mountains to the lovely village of Leavenworth to visit old friends of his and Sandi's. We would argue and laugh about politics and the state of affairs in the world. We women would try to drag him through a few stores which I am sure he enjoyed more then he let on. We would then stop for apples in the canyon on the return home, relishing the reds and golds of turning leaves.

I last saw Larry 10 days before he left us and I will always remember sitting on the porch, with Bella's face on his knee, and the warm sun bathing us all, after a very cold spring. He was cheerful, joking and laughing. Soon after he was in full Hospice care. In his last weeks he was surrounded by the care and love of his children and grandchildren. His passing to the Father is a loss to all who knew him, though he has gained a High Place.

Posted by mother hildegard at 1:54 PM