ST. BAVO (d. 654)  was a Belgian nobleman who spent a wild youth, noted for his selfishness. He was known to have sold his servants as slaves to local noble houses. He later married and was a widower. After hearing a sermon by St. Amand of Maastricht he converted and vowed to change his life.

He built an abbey on his estate, called St. Peter‘s in his day and St. Bavo’s today. He turned it over to St. Amand, and became a monk. He finally gave his estate to the house, his belongings to the poor, and lived as a recluse in a hollow tree and later a cell in the forest near the abbey.

Because he is so often shown with a falcon, he is considered the patron saint of falconry.

ST. LUDGER (d.809) was the son of wealthy Frisian nobles. His brothers were St. Gerburgis and St. Hildegrin. He heard St. Boniface preach in 753, and was greatly moved. He studied at Utrecht, Netherlands under St. Gregory of Utrecht and later under Bl. Alcuin in England.

In 773 he returned to the Netherlands as a missionary. He later lived as a Benedictine monk at Monte Cassino, Italy from 785 to 787, but did not take vows. At the request of Charlemagne, he returned to Friesland as a missionary. It was a successful expedition, and he built a monastery in Werden, Germany to serve He built a monastery at Mimigernaford as the center of this missionary work, and became its abbot. 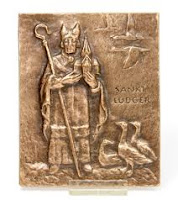 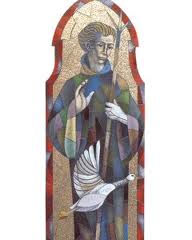 St. Ludger’s health failed in later years, but he never reduced his work load. No matter how busy or dangerous his outside life, he never neglected his time of prayer and meditation, it being a source of the strength to do everything else.

He is considered the missionary to the Saxons. In art, St .Ludger is portrayed as a bishop with a swan or goose near him.


Posted by mother hildegard at 3:56 PM