CRAZY MAN in the DESERT? REPENT FOR THE END IS NEAR???? 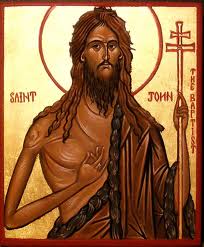 As we start the second week of Advent, the Church turns her attention to the figure of  John the Baptist, the forerunner or herald of Jesus Christ.

All Sundays of Advent are unique in their own way, but the Second Sunday particularly stands apart for its invitation to John the Baptist to come out of the wilderness shouting for us to repent.

Who was this "mad man" running around the desert? "John wore clothing of camel's hair with a leather belt around his waist, and his food was locusts and wild honey."  John certainly didn’t waste much time on food preparation but  locusts (pure protein) and wild honey were probably a more balanced and healthier diet than most of us eat today. Nor did he care much for his attire. So what gives here? Who paid attention to this prophet of seeming gloom and doom (with a message of HOPE for all who heard with their hearts)?

Today  we have those who pretend to be prophets saying  the world, as we know it, will end this December 21, as predicted by the Mayans.

21 December 2012 marks the end of the Mayan calendar. Various astronomical alignments and numerological formulae have been proposed as pertaining to this date, though professional Mayanist scholars state that predictions of impending doom are not found in any of the extant classic Maya accounts, and that the idea of the world "ending" in 2012, misrepresents Maya history and culture.

We look at the people running around preparing for such a disaster (as they have for the past 2000 years) and say "they are mad"!  and yet?  What is the true message here? Does it relate to the message of John? Repent for you know not the hour?


The Gospel reads:
John went throughout the whole region of the Jordan, proclaiming a baptism of repentance for the forgiveness of sins, as it is written in the book of the words of the prophet Isaiah:


A voice of one crying out in the desert:
“Prepare the way of the Lord,
make straight his paths.
Every valley shall be filled
and every mountain and hill shall be made low.
The winding roads shall be made straight,
and the rough ways made smooth,
and all flesh shall see the salvation of God.”

John's words  touch the core of many hearts. Peoples’ lives change because of his message. He paints a picture of valleys overflowing with justice, of mountains leveled by love and yet he will be killed for his message. 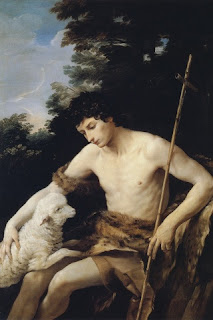 This Advent, as we prepare in our hearts for the coming of  the Child, we need to pay attention to this message, the only one that can lead us to Him. And may it be a "new era" in the world's love and devotion to Christ!


Posted by mother hildegard at 6:33 PM