Right after Christmas we celebrate the feast of the HOLY INNOCENTS.

This week we celebrate a little earlier as the children from last week's massacre are laid to rest. This morning in the news was another story, almost too unbearable to read due to its touching nature showing us  the kindness of humanity when suffering is beyond our ability to understand.

A heart-breaking guard of honor for their little comrade as firemen lined the funeral of seven-year-old Daniel Barden who dreamed of joining their ranks - but whose life was cut short at Sandy Hook.
Daniel  had one hope when he grew up:  to be a firefighter like his uncles.
But while the youngster's future was tragically cut short when he became one of  the 26 victims in the Sandy Hook massacre on Friday, his dreams have not been forgotten. 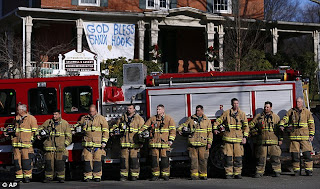 In a heart-wrenching display of kindness and remembrance on Wednesday morning, firefighters from as far as New York City attended the young boy's funeral in Newtown to pay their respects.
As Daniel's parents, brother and sister arrived at St. Rose of Lima Church  the firefighters somberly formed an honor guard along the road, silently offering support to the heartbroken family.

The child's funeral is the latest in the long, almost unbearable string of services for the innocent victims of the killings.

His  father said: 'Our son had so much love to give to this world, and he was supposed to have a whole lifetime of bringing that light to the world. All of us have suffered a loss because that won't be realized.' 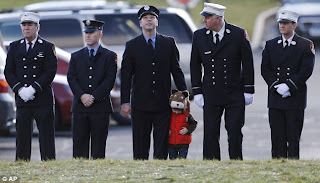 May Christ who is the LIGHT of the World bring some comfort and peace to these families at this time when we should all be celebrating not mourning.  But as Christians we know that His Coming into our world was to be followed by  His death and Resurrection.
Posted by mother hildegard at 1:18 PM