BLESSED CHIARA BADANO was born in 1971 in Italy. Her mother tried to teach her daughter to love and serve those in need. By the time she was in kindergarten, Chiara was saving up her money to donate to the African Missions. In elementary school, she would give away her lunch snack to another less fortunate classmate. Even when her mother started to pack her two snacks, Chiara would simply give both away.  At age nine she joined the Focolare Movement and received the nickname "Luce" by the founder Chiara Lubich. The group focused on the image of the forsaken Christ as a way to make it through difficult times. Chiara later wrote that, “I discovered that Jesus Forsaken is the key to unity with God, and I want to choose Him as my only spouse. I want to be ready to welcome Him when he comes. To prefer Him above all else".

While Chiara was a conscientious student, she struggled in school and even failed her first year of high school. She was often teased in school for her strong beliefs and was given the nickname “Sister.”  She also enjoyed the normal teenage pastimes such as listening to pop music, dancing, and singing. Chiara was also an avid tennis player and she enjoyed hiking and swimming.

When she was 16 she was diagnosed with osteogenic sarcoma, a painful bone cancer. Chiara’s faith and spirit never dwindled even after the cancer left her unable to walk and a CAT scan showed that any hope of remission was gone. In response, she simply said, “If I had to choose between walking again and going to heaven, I wouldn’t hesitate. I would choose heaven.  Chiara died of the cancer in 1990 after a two-year-long battle. Two thousand people attended her funeral and  the mayor of Sassello shut down the town so people would be able to attend. 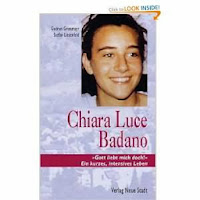 Posted by mother hildegard at 9:34 AM