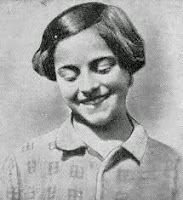 SERVANT of GOD ANFROSINA BERARDI was born 1920  in Italy. She was brought up according to the religious and moral principles of his family.

A fundamental feature of the life of Anfrosina  was the long suffering caused by a serious illness that led to her death within a few years. Despite the suffering, she lived a life of prayer and sacrifice by example and word.

Initially she became ill with appendicitis. After being operated on she continued to suffer, having trouble swallowing. Due to yet another problem she had another operation, with little chance of survival.

After receiving  her First Communion and Confirmation, on 13 October 1932, Anfrosina spent the last five months of her life in bed, almost without being able to feed.

She died on 13 March 1933, surrounded by her family and many people, attracted by the fame of her spiritual life.

Despite her young age, she demonstrated a surprising capacity to endure suffering and due to her relation with Jesus and Mary is considered a mystic.
Posted by mother hildegard at 11:36 AM