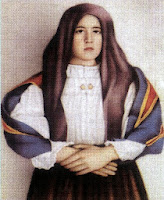 For this feast, one of my favorites, I present modern day martyrs!  I pray you all had a blessed and joyfilled Christmas!  This blog got behind as I was hospitalized 5 days before Christmas with cellulitis in the leg that had the knee replacement in October. All is well now, but I must keep leg up most of the time, which gives me more quiet and prayer time than usual!


BLESSED ANTOINIA MESINA   1919-1935
Antonia was born in Sardinia in 1919, the second-born of ten children. She was forced to leave elementary school, only after taking four years of classes, in order to take over the household duties from her mother, Grazia. She often called Antonia "the flower of my life."

Her mother developed a heart condition that prevented her from continuing to perform her domestic chores. Grazia claimed that Antonia "never once went against me". Antonia was obedient and hard working. She willingly and diligently performed her duties and took on responsibilities as if she were already an adult. For instance, she cooked, baked, cleaned, washed clothes, cared for the children, carried water into the house, and gathered wood for baking.

When she was ten years old, she joined a youth group called "Catholic Action". She thought it was a beautiful experience and said that it "helps one to be good". She was well-liked by her peers and encouraged others to join Catholic Action because they received spiritual benefits from good works and received good catechesis.  Antonia renounced her personal pleasures and sacrificed her wants for that of her family members needs and others.

While coming home from gathering wood in a forest with a friend, Antonia was attacked by a teenage boy from behind. The attacker grabbed her by her shoulders and tried to force her to the ground while her friend screamed and ran for help. Antonia managed to escape twice but was knocked down the third time and severely beaten on the head and face with a rock. Though mortally wounded, Antonia resisted the would-be rapist. At autopsy, the doctors determined that Antonia's body had not been sinfully violated. The beautiful and virtuous, Antonia, died a martyr of holy purity at age 16 similar to St. Maria Goretti who died at age twelve.

SERVANT of GOD ELENA SPIRGEVICIUTE born in Lithuania and died 1944 defending her purity.
She wrote in a journal about the events of her city of Kaunas during this period of war, but also revealed her spiritual life.  Elena, shaken by the circumstances that the country is experiencing, confesses that a crisis: "I decided to be a good Catholic, but it is difficult without the help of the Lord, and I feel lost ... Would you be good, do not want lead a bleak existence, but contribute something good, be helpful. "
.
The conflict between Nazi and communist partisans spread an atmosphere of terror in her city. September was the massacre of local Jews, shocking the entire population. Elena's diary reveals her despair. This tragedy led her to wonder about her vocation in this broken world.

In February 1942, she writes: "My heart is full of anything. I am glad that you understand what happiness is. But seriously I think I can find a greater peace of cloistered convent. The term evokes the solitude, the silence, the peace. Lord, behold, serious dreams. I want Him, surely. I want to live something. Oh, how I wish the war was over! To finish my studies and devote myself  to God.

On January 3, 1944 four armed and drunken men break into the house, declaring themselves Soviet partisans. They tried to harass Elena who opposed them. They threaten her with death. Unyielding: "I'd rather die"  resisting the violence of her assailants she is shot.

Lithuanians consider her a symbol of national resistance, recognizing her as a martyr.

BLESSED KAROLINA KOZKA  (1898- 1914) was a Polish teenager who has been beatified as a virgin-martyr by the Roman Catholic Church. She died while resisting an attempted rape by a Russian soldier.  She was almost immediately venerated by people in her hometown following her death.   She is sometimes called the Polish Maria Goretti.

She grew up in a Catholic family who prayed everyday and displayed the love of God to her. Often, Karolina would gather neighbors and relatives, mainly children, and they would read the Scriptures together under a pear tree near her home.  She loved praying the rosary, using the beads given to her by her mother. Her prayers often caused her to get less sleep than she needed. “Often during the day she quietly whispered the words, ‘Hail Mary!’ as she herself often said, because they made her ‘feel a great joy in her heart’”.

She would pray the rosary constantly, and even though it was a long walk to Mass, she would go during the week, in addition to Sunday.]Karolina’s uncle, Franciszek Borzecki, was one inspiration for her faith. Because of her love for serving, she helped her uncle in the library, and she also helped organize things at her parish. In addition to serving the Church, she taught her younger siblings and the children of the area their catechism.

In 1914, World War I broke out in Poland, affecting the Kozka family forever. The Russian army began capturing cities, and in November 1914, they controlled Wal-Ruda. The situation grew worse as stories spread of the soldiers stealing possessions and raping women. Fear spread through the city. On November 18, an armed Russian soldier came to their house, and he ordered Karolina and her father to go with him, saying he was taking them to the commanding officer.

When the trio reached the edge of the forest, the soldier commanded Karolina’s father to return home. The man went back to his home, leaving his daughter in the clutches of the Russian. Two boys on their way back from the village witnessed the attack of the soldier on Karolina. He attempted to force himself on her, but she struggled and refused to give in. Angered, the man stabbed her with his bayonet multiple times. Karolina ran towards the swamps, which saved her from further attacks since the chase was difficult for the soldier. When he saw her fall, he gave up the chase. But it was too late for Karolina; the wounds inflicted on her by the soldier had caused too much blood loss. She died in the swamps, her purity intact.
She is the patron of youths and farmers. 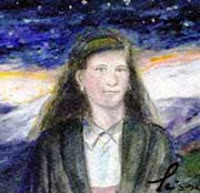 Emulating St. Maria Goretti, she was born in 1923  and died  in 1943.
"... I wanted to preserve my honor, to die a martyr and not fall into the hands of the Germans ...".
These words spoken by Rosa Del Bene in her agony, testify to her voluntary choice to sacrifice herself to the death in defense of  purity, in honor of freedom and justice.

Those who knew Rosa testified to the sanctity of her life, especially in prayer. At the end of her life she voluntarily chose, with courage and unshakable faith, to live out her faith rather than to give into the against the overbearing, unjust Nazi cruelty during the painful, humiliating period of military occupation of the territory of Palena.

Coming from a deeply Christian family  she joined the militant Catholic Action in Palena. During the war she chose martyrdom to the loss of her purity against the impending violence of an Austrian soldier. Her brother, Salvatore,  and others were at her death bed and testified to the holiness of her death.