When I stayed with Tricia Reust (last Blog) she spoke many times of an Aboriginal woman, named MAROOCHY BARAMBAH, who was very active in bettering life for her people. Unfortunately, when I was there she was traveling elsewhere. I later found that she is  a mezzo-soprano singer who is of the Turrbal-Gubbi Gubbi people and is a member of the Stolen Generations. She considers herself a beneficiary of her removal. As a tribute to her Aboriginality she took the names Maroochy (meaning "black swan") and Barambah (meaning "source of the western wind". She was born Yvette Isaacs in the 1950s in Cherbourg, Queensland.

At the age of 12 she was taken from her family and fostered out to a family in Melbourne. This movement was an effort by the government to separate children from their heritage. She later attended the Melba Conservatorium of Music in Melbourne and Victorian College of the Arts where she graduated in Dramatic Arts in 1979.

Maroochy  rose to fame for her part in the 1989 Sydney Metropolitan Opera production of “Black River”, by Julianne and Andrew Schultz, an opera about black deaths in custody. She also appeared in the indigenous musical “Bran Nue Dae”, the 1981 television series “Women of the Sun”, and in the opera “Beach Dreaming”, written for and about her by Mark Isaacs.

Maroochy has also had extensive community involvement over many years working with the younger generation of Indigenous Australians in the arts industry.  She has delivered several lectures on Aboriginal culture in various institutions and was a keynote speaker at the Australian Reconciliation Convention in Melbourne in May 1997.

When Maroochy made her operatic debut in “Black River” , she became the first Aborigine to perform on the Australian operatic stage. She was the first Australian to perform at the United Nations in New York in honor of the International Year for the World’s Indigenous Peoples in 1993.  In November 1995, Maroochy starred in the American opera "Porgy & Bess" and became the first Indigenous Australian to perform in an opera at the Sydney Opera House.  She hopes to continue to work in this area of the performing arts, while at the same time engender better understanding of Aboriginal culture.


She has received many awards, both in Australia and overseas. In April 2000, Maroochy was awarded an Honorary Senior Fellowship of the University of the Sunshine Coast in Qld. for her outstanding and sustained contributions to the community. Her career spans the genres of jazz, rock, musical theater, as well as classical opera

Tricia has painted her several times.  She certainly captures “the soul” of this remarkable woman who has a strong sense of who she is, her heritage and her role.

She comes from a songline, so she never doubted that she would end up singing. But Aboriginal music was not always as accepted as it is today. “If you come from your roots, you don’t have to impress people. We as a nation are coming to a point where we feel more comfortable with ourselves and with our culture." 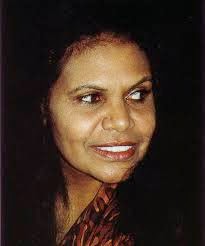 Posted by mother hildegard at 9:05 PM