St. John Paul II is sometimes remembered as a “saint maker” who canonized 482 men and women during his 27-year pontificate. Pope Francis, however, is an even more prodigious “saint maker” who has canonized more saints than have all the popes of the past three centuries combined.

If Bl. John Paul was a “saint maker,” it was largely because of his canonizations of large groups of martyrs: 402 of the 482 saints he canonized were martyrs. And so it is with Pope Francis, who has canonized 817 saints, 813 of them martyrs.


One new saint close to home is BL. MARIE ROSE DUROCHER ( Eulalie)  who was born October 6, 1811 in the village of Saint-Antoine-sur-Richelieu, Canada. The family was pious and five of the eight children dedicated their lives to service in the Church, three as priests and two as religious. At her  brother’s parish, she worked for twelve years organizing the Legion of Mary, teaching the catechism to children, even ironing altar linens!  All of which would be great preparation for her own life’s work.

Bishop Ignace Bourget  invited Eulalie to found a new religious community, the Sisters of the Holy Names of Jesus and Mary, based on an order of the same name in Marseilles, France. She faced much opposition but eventually founded the first house at Longueuil along with her new sisters, Melodie Dufresne and Henriette Cere. It wasn’t long before new recruits were begging to join the community. In 1844, after a year of preparation, the three foundresses received their “holy habit” and made their vows. They also received their religious names, and Eulalie Durocher became Mother Marie Rose. 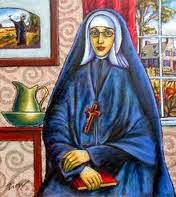 New houses quickly followed while the number of sisters grew. A biography describes Mother Marie Rose as “a methodical, orderly woman… a capable administrator, dynamic and creative.” “She was the artisan of a light-hearted feeling in the house.” A sister described her as “a cultured lady.” She was a gifted teacher and (not surprisingly) had a genius for communicating the mysteries of faith to young people. She explained things “in a clear, precise way, that was lively and practical, and with such fervor that the smallest girls one day asked their teacher: ‘Are the angels holier than the Mother Foundress?’”

Thirty-two at the time of her call to religious life, Mother Marie Rose died on her thirty-eighth birthday, after only five years as a nun. “God will take care of you,” she told the community gathered around her deathbed. And she was right. Today there are more than 1,500 religious working in Canada and the US and many parts of the world. Mother Marie Rose was beatified by Pope John Paul II in 1982.  Her feast is celebrated Oct. 6.

Our Cathedral of  St. James in Seattle has a lovely icon of this new Blessed which hangs in the Mother Mary Rose Conference Room at the new Pastoral Outreach Center. The icon was commissioned as part of the Centennial Campaign as a tribute to the Sisters of the Holy Names who have ministered in the Cathedral parish for nearly 100 years.

The icon, created by Cathedral iconographer Joan Brand-Landkamer, tells the story of the life of this young French Canadian nun through scenes of her life and places she lived.

Posted by mother hildegard at 9:31 PM