In the past three years the Church has proclaimed about 160 people as SERVANTS of GOD.  Servant of God is the title used for a person who has been posthumously declared "heroic in virtue" during the investigation and process leading to canonization as a saint.

Thirteen of these are Americans, eight are Jesuits (our theme this summer) and four are Benedictines, all women, and many are from the laity. Countries as far away as DR of Congo, , , S. Sudan, and  have men and women being considered.

Some we have already done Blogs on: Romano Guardini (Aug. 2016), Joseph Dutton of Molokai (Apr. 2016), and Sister Blandina Segale (The Fastest Nun in the West- July 2014). Others, especially from our own country, we will present in future Blogs.

Having grown up in Los Angeles, I am always excited to learn of new saints coming from that area. This would have been a new order to the area as I was starting High School and then when I left for College I never really lived in Los Angeles again, so I was unaware of them. But any order dedicated to the Sacred Heart has my attention.

SERVANT of GOD IDA PETERFY  began the Society Devoted to the Sacred Heart, dedicated to religious education, in her native in 1940.
Sister Ida was born in 1922 in Košice (at that time part of , from a Catholic family of Hungarian descent. She was the only child of Dr. Péterfy József, professor of law and history, and the fourth daughter of Kristóf Ida, who had been widowed during the First World War.

During her primary education with the Ursuline Sisters, she began her lifelong participation in activities of Catholic movements like the Sacred Heart League . Faith and devotion developed in every aspect of her young life. As an avid member of the Hungarian Girl Scouts, she lived its ideals of loving God and neighbor through the exercise of truthfulness, reliability, and readiness to help. During summer camps, she found creative means to impart Catholic teachings on young participants.

Her actions in behalf of the Jewish people – rooted in the conviction that “Jesus loved everyone”, caused her to break up with an upper-class boyfriend who harbored anti-Semitic sentiments.
Ida was preparing to go to college in 1940 to pursue a degree in chemistry when she attended a three-day retreat that would change her life direction. She received the grace to understand that God knows her by name: “I clearly realized that God does not know me as [if I were] a cabbage in a cabbage field. Rather, He knows and loves me very personally and uniquely – as Ida.” During the same retreat, she thought of the children of the summer camp, wondering who would continue bringing them close to Jesus as Nazism and Communism were looming. She thought and answered her question, “The Church will.” But in the light of grace, she found herself continuing this inner dialogue: “And who is the Church? You are the Church, you teach the children.”

This experience had a profound effect on Ida. In total surrender, she abandoned her plans to go to college to pursue a call from God to catechize His children. Convinced of the authenticity of her vocation, Bishop Madarász István, Ordinary of Košice, encouraged her to pursue it. On 7 October 1940, her eighteenth birthday, Ida pronounced private vows of poverty, chastity and obedience before the Blessed Sacrament at the Franciscan Church of Košice. 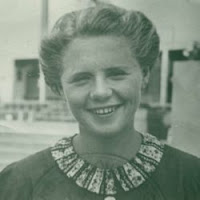 During World War II she helped hide several Jewish families from the Nazis, and when Communist rule came to she kept her group together by creating a cover organization--a secretarial school for typing and shorthand.
Convinced that training Catholic leaders was important for the Church’s future, Ida used money she inherited from her father to purchase a property in the mountains near Košice to build a leadership center and camp.

The escalation of the Second World War further impacted the development of the community. Persistent rumors that the Nazis were suppressing religious congregations compelled Ida and her companions to take prudent steps in their activities. They decided to do their apostolate quietly, attract as little public attention as possible, and wear simple street clothes. Concerned by the further incursion of Soviet forces into in 1944, Ida decided to move the center of her community to . At the end of the war – and after enduring several life threatening situations during battles waged by German and Russian forces in Hungary – Ida was able to reconnect with her scattered companions and gather again her little community.

Through creative means, Ida and her companions were able to maintain the business school they opened in Budaörs in operation. This enabled them to have a livelihood and continue to live as a community. Despite restrictions, Ida continued to conduct catechist formation courses and children’s retreat days, mostly disguised as puppet shows to protect attending children, parents and catechists from the unexpected raids of the Communist secret police. Ida would often say: “We have to teach children the essential truths of our faith in a very short time and bring them to the Heart of Christ so that they can live their faith in every circumstance.”

The arrest of the Servant of God Mindszenty József, cardinal primate of , in 1948 signaled the intensification of persecution in . Ida was determined to continue her work and accept the consequences for it. However, she was prevailed upon by the provicar of the Diocese of Székesfehérvár to “go to a free country, develop the community, and come back some day when it would be possible.” Ida secretly left on 14 February 1949. After a brief stay in , , she migrated to .

In 1956, Sister Ida received an invitation from the James Francis Cardinal McIntyre, Archbishop of Los Angeles (), to begin a community in his see. Convinced that the Providence of God was leading her to the , Sister Ida accepted the invitation. Likewise, after years of instability and uncertainty – their tense development and escape from Communist Hungary and their transitional start in  Sister Ida felt that that would be the opportune moment for the community to have a fixed mother house and novitiate.
Arriving in in 1956, the order created a stir because of its nontraditional dress code.

But even Cardinal James McIntyre, then head of the Los Angeles Archdiocese and known for being extremely conservative, urged Sister Ida not to change the dress policy. 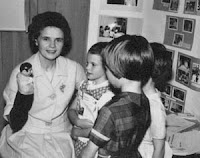 The sisters of the order taught basic elements of church doctrine to children. They used puppets, song and dance and educational techniques that Sister Ida had begun to develop in . They sponsored educational retreats to their camp in Big Bear, where they held classes for children and their parents.
In the early 1970s, Sister Ida took her message to television, producing the children's show "My Friend Pookie," which ran on KABC for three seasons. In the 1980s, she produced 30 half-hour installments of the "Sacred Hearts Kids' Club." They are still shown around the world, although the program has never aired in .
Sister Ida believed that the membership of the order, which established a convent in in the late 1970s, should be multinational. Today they are in three continents: in the archdioceses of Los Angeles and St. Louis, in the dioceses of and , and in the archdiocese of , where the evangelization apostolate is complemented with significant medical work.  Sacred Heart Sisters strive to present the Catholic Faith to every age level in an inspiring, dynamic, attractive manner leading the whole person to conversion of heart.
Sister Ida was a lifelong athlete who especially loved hiking and camping (she took the sisters of the order on several trips to the ), she was diagnosed as having lymphoma in 1995. At first it hardly slowed her down. Later she made several hospital stays at the City of , where she was visited by church leaders.

She treated everyone the same. "One time I walked in and she was talking to the cleaning woman, asking about her family and telling her how much she appreciated having a clean room when she was sick. The nurses used to fight over who would take care of her”, said one of her sisters.
She died in her room at the mother house. Sister Ida said, “The love of Our Lord is everything! When you realize that you love Our Lord, when you realize that He really loves you too, He personally loves you, then you cannot help but love Him back. Once you love Him back, it obviously leads to the Sacred Heart.”

Posted by mother hildegard at 10:02 AM