USELESS KILLING IN HAITI- ANOTHER RELIGIOUS

This past week another useless killing of a religious, who like so many, goes into a poor country with the intent to help the poor and needy. From her photos she looks like a lovely, caring woman, but I wonder if she had been in a habit, if she would have been protected?

The body of slain Spanish Sister Isabelle Sola Matas was carried away by morgue workers, after she was attacked while driving her car in downtown , Friday, Sept. 2, 2016. Local judge Noel Jean Brunet said that two men on a motorcycle drove by and killed the 51-year-old Roman Catholic nun while she was driving. She worked at church where she directed a program providing people with prosthetic limbs.

She was a member of the Congregation of the Religious of Jesus and Mary, whose order commit themselves to serving others.

Jean Brunet Noel, a justice ministry official at the scene, identified the woman as Sister Isabel Sola Matas, 51. He said she was from but had lived in for years. Noel said her purse was stolen after assailants shot her twice in the chest as she sat at the wheel of her SUV. She was attacked as she inched down a winding avenue filled with pedestrians and vehicles in Bel Air, a rough hillside neighborhood of shacks in downtown .


A Haitian woman who was a passenger in the car was also shot twice and taken to a hospital. Her condition was not immediately known.

At Sacred Heart Catholic Church, the Rev. Hans Alexandre described Sister Isabelle as a "tireless servant of God" who helped build houses, worked as a nurse, fed the hungry and created a workshop where prosthetic limbs were made for amputees injured in 's devastating 2010 earthquake.

"The loss is immense. In killing her they didn't kill just one person, they killed the hopes of many people," Father Alexandre said. 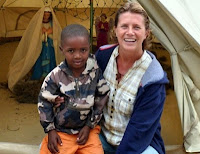 She was widely known for her generosity. She hosted Father Alexandre and four other priests at her two-story home for over a year after the previous church building and its rectory were toppled by the quake.

She helped raise tens of thousands of dollars to build a vocational school on the church compound where Haitians could learn everything from catering to electrical wiring to music, Alexandre said.

One Haitian woman outside Sister Isabelle’s home shouted in distress and anger when she heard about the killing. "What a country this is! She did so very much for people here and this is what happens," Suzie Mathieu said.

By her home's metal gate, a disheveled man in tattered clothes stared at the ground. "She was the person who took care of people like me, helping with food and other things," he said. "I am very sad today."


We pray especially for Spanish missionary nun, Sister Maria Isabel Sola Macas, who was killed two days ago in the capital of , a country so tormented, for which I pray for an end to such acts of violence and for greater security for all. We also remember other sisters that recently have experienced violence in other countries.
Posted by mother hildegard at 6:44 AM