THE SERVANT OF LEPERS

BLESSED JAN BEYZYM was a Polish Jesuit  known as  "the Servant of Lepers”, having worked for many years in a leprosarium in .

He was born into the gentry, yet knew hardship in his youth. His family were dispossessed of their ancestral home following a failed revolt against Russian rule.

Bl. Jan entered the Jesuits at age 22 in 1872. As a  novice he helped other Jesuits in caring for victims of a cholera epidemic. This experience may have planted a seed in his desire to help others. He was ordained in 1881, and spent the next 17 years teaching in Jesuit schools in . During these years he repeatedly requested to be assigned to the missions to work with lepers.

In 1898, his wishes were fulfilled and he was sent to .  He found the conditions deplorable, with the 150 patients lacking shelter, nutrition & medical treatment.  He immediately began to improve the terrible conditions while laying plans for a new hospital.
He also worked to change social attitudes toward the stigma of leprosy (shades of St. Damien of Molokai).

He said: One must be in constant union with God and pray without respite. One must get used to the stench, for here we can’t breathe the scent of flowers but the putrefaction of bodies generated by leprosy.”

In 1911, a year before he died, Bl. Jan inaugurated the new hospital for his people.  Many came, not only because of the better care, but because of the devotion of the priest who had served them with such love. 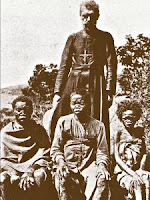 Bl. Jan was beatified by Pope St. John Paul in 2002. As a missionary he was conscious of the global dimension of the Jesuit Society’s work to meet the needs of humanity. “One’s country is where the greater service of God and help of souls is found. It does not matter where you live, at the Equator or the North Pole. What really matters is to die in the service of the Lord Jesus as a a member of our holy Society.
Posted by mother hildegard at 8:57 AM