FOLLOWER of ST. DAMIAN of MOLOKAI 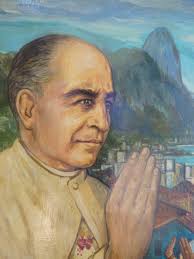 BL. EUSTAQUIO van LIESHOUT, SS.CC., (1890 -1943) born in the Netherlands, was the eighth of eleven children.  After reading the biography of Father Damien de Veuster and his work with the lepers on Molokai, he joined the Congregation of the Sacred Hearts of Jesus and Mary.

His first assignment was as assistant novice master for his order. He was then assigned to towns in Southern Holland, where he provided pastoral care for the many Belgian refugees. In recognition of his work, the King of Belgium knighted him in the Order of Leopold.

He then spent two years as a parochial vicar and in 1924 he was sent to Spain to learn Spanish, in anticipation of an assignment in Uruguay. However he ended up being sent to Brazil, where the language was Portuguese. (God's sense of humor). He arrived in Rio de Janeiro on 12 of May 1925 along with two other priests and three lay brothers, in response to an appeal by the local bishop.

In 1935 he was sent by his religious superiors to Poá. After news spread of Bl Eustaquio's transfer, the population of the town started a bloodless uprising to stop him from leaving. Nevertheless, he left in obedience for his new parish, where he worked to oppose the widespread practice of Candomblé (a semi-pagan religion).

His blessings and cures of the sick through the intersession of St. Joseph made the little village a noted center of pilgrimage.This, however, brought major problems to the town. Railroads were not able to furnish transportation for the great crowds; the lack of adequate housing meant that sanitary conditions were inadequate to the need. police were no longer able to maintain order. 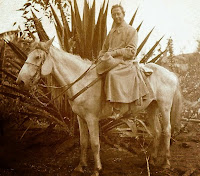 Merchants sold bad food at high prices and thieves roamed the pilgrimage area preying on innocent victims. Bl. Eustaquio was ordered to leave the parish to prevent these conditions from continuing. Despite this, tremendous crowds followed him everywhere. Brazilian authorities became so alarmed that they ordered him out of towns and villages. No one had anything against him, but they were afraid of the crowds and the commotion that would follow him.

The Cardinal Archbishop of Rio de Janeiro instructed Bl. Eustaquio to leave the capital by midnight. Subsequently, a fanatical crowd blocked traffic and invaded church rectories looking for him. He left Poá May 1941.

Somehow, he managed to find a hiding place and passed a year in peace and happiness. His final appointment was as pastor of Belo Horizonte, where he lived the last two years of his life. He was given an assistant who was able to control the crowds. No one was permitted to enter the rectory without a letter of introduction. In this fashion, he was able to devote his complete energy to the work of his parish. After a week of sickness caused by an insect bite, he died on August 30, 1943. 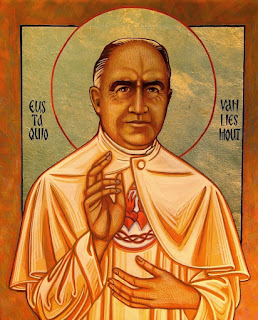 Posted by mother hildegard at 8:16 PM