THE CHURCH IN HAWAII- FIRST BISHOPS

This past week the priests in the Diocese of the Hawaiian Islands had their annual retreat on Oahu. Father Steven from Waimea attended. This caused me to look up the present Bishop and the history of the Church in Hawaii. During its mission period (1827-1940), the Catholic Church in Hawaii had six bishops. Officially referred to as vicars apostolic, they all belonged to the France-based Congregation of the Sacred Hearts who sent the first Catholic missionaries to Hawaii in 1827. They were missionaries in the true sense of the word, leaving a legacy that has influenced the Church in Hawaii even up to modern times. 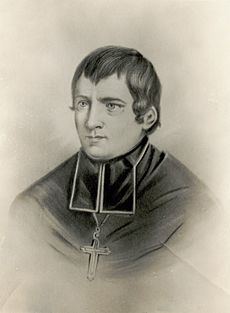 Hawaii's first missionary bishop, Stephen Rouchouze SS.CC. was a Frenchman. He was consecrated a bishop in 1833 at the young age of 35 to head the mission of "Eastern Oceania" which included the islands of Hawaii, Tahiti, Gambier, Marquesas and Tuamotu. He was stationed in Gambier in 1835, and after religious freedom was permitted in Hawaii, arrived here on May 15, 1840.

On June 6, the eve of Pentecost, he baptized 195 native Hawaiians at the Honolulu mission on Fort Street, signed a contract on June 22 for the building of the Cathedral of Our Lady of Peace; and in December ordained Sacred Hearts Father Bernabe Castan to the priesthood, the first ordination in Hawaii.

Bishop Rouchouze sailed for Europe on January 3, 1841, to gather more missionaries and supplies for his Pacific missions. But on his return voyage in early 1843, his ship, the "Marie-Joseph" sank and all were lost at sea.

A French Sacred Hearts priest who worked with Bishop Rouchouze in Gambier and Hawaii, Father Louis Maigret, SS.CC. was exiled from Hawaii in 1837, along with the dying Sacred Hearts Father Alexis Bachelot. They left Honolulu bound for Ponape on November 23, 1837. During the voyage, Father Bachelot, Hawaii's first Catholic priest, passed away and was buried in Ponape by Fr. Maigret.
Made a bishop in 1847, Bishop Maigret completed the cathedral planned by his predecessor in 1843; founded the island's first Catholic school, Ahuimanu, in 1846; and brought in Hawaii's first nuns, the Sacred Hearts Sisters, in 1859. 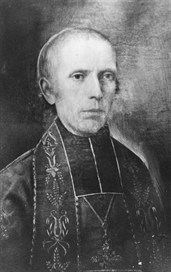 Bishop Maigret ordained Father Damien de Veuster in the Honolulu cathedral on May 21, 1864, and in 1873 assigned him to Molokai.  In late 1869, he attended the First Vatican Council in Rome.
Bishop Maigret died on June 11, 1882, after 42 years of service in Hawaii, 35 of those years as a bishop. He is buried in a crypt below the cathedral sanctuary. 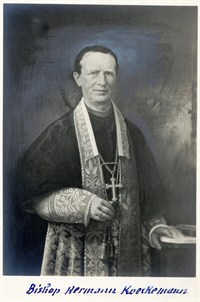 German-born Bishop Herman Koeckemann, SS.CC. was a brilliant scholar. He arrived in Hawaii in 1854 as a young priest and was assigned continually to the Honolulu mission. He was made coadjutor bishop, one designated to follow the present bishop, on August 21, 1881, to assist the aging Bishop Louis Maigret.

Bishop Koeckemann became Hawaii's third vicar apostolic following Maigret's death nearly a year later. With a diminishing population of the native Hawaiians, his administration saw a new apostolate with the growing numbers of Portuguese immigrants. A strong advocate of education, he introduced the Marianist Brothers to staff Catholic boys' schools in Honolulu, Wailuku and Hilo. He welcomed then Mother Marianne Cope and her Franciscan Sisters of Syracuse to work with Hansen's disease patients in Honolulu and Molokai.

The bishop's relationship with Father Damien was stormy at times, but he always showed a fatherly concern for the great "Apostle of Molokai."


Bishop Koeckemann died shortly after being stricken with paralysis on February 22, 1892. He was finally laid to rest under the tall iron cross in the Catholic cemetery on King Street near downtown Honolulu.

Father Gulstan Ropert, SS.CC. came to Hawaii from France in 1868 and was assigned to Hamakua on the Big Island, where he immediately fell in love with the Hawaiian people. He made Waipio Valley his center and had Father Damien, his neighbor in Kohala, build a couple of chapels there.
After fifteen years in Hamakua and nine years in Wailuku, Maui, he was appointed bishop, despite his protests, on September 25, 1892. He continued his predecessor's support of education by building Catholic schools. and assisted the Franciscan Sisters with their hospital in Kalaupapa. 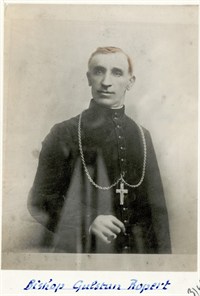 In December, 1892, Bishop Ropert constructed an impressive two-story residence for the mission fathers on the cathedral grounds and erected the statue of Our Lady of Peace that still stands in the cathedral courtyard.
Bishop Ropert's administration witnessed the overthrow of the Hawaiian monarchy and the eventual annexation of Hawaii by the United States. The bishop was a good administrator, mild-mannered, and extremely kind and patient. Many say that his disposition suited well the quiet conducting of the affairs of the Catholic mission through Hawaii's disturbing political era.

After patiently bearing an illness for several years, Bishop Ropert died on January 4, 1903. He is buried next to Bishop Koeckemann at the King Street Cemetery.
Posted by mother hildegard at 1:28 PM