WYOMING CATHOLIC COLLEGE is marking its 10th anniversary this school year. The school’s distinctive combination of a Great Books curriculum and strong formation in the Catholic faith with outdoor learning is the kind of education I would have wanted in my youth. Horseback riding, hiking, canoeing as part of the general studies- are you kidding? 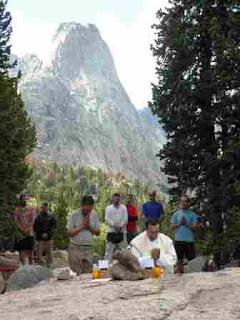 One of our early and most beloved land program men is now a professor of philosophy there, and a recent land program woman graduated from WCC a few years ago.  Another young woman, whom we hope is the future of religious life at OLR, is presently a student there.

WCC whose official founding is Aug. 25,  is one of the newest additions to the small group of faithfully Catholic colleges in the . It is perhaps most similar to Thomas Aquinas College in (another college where we have had LP youth come to work & study with us). Both schools have a Great Books program.

But Wyoming Catholic stands out for its near-total ban on campus cellphone (my kind of place) use among students and its heavy emphasis on the outdoors as a place to nurture the virtues, grow in faith and better appreciate the timeless wisdom of the classics of Western literature. Approximately 60 percent of students attend daily Mass, and all attend Sunday Mass. A sizable number of students have expressed interest in a priestly or religious vocation, our Hannah being one of them.

in Lander,  uses the town's sole Catholic church and accompanying facilities as an interim campus. Access to Lander isn’t easy. Students typically fly into or . Riverton, only slightly larger than Lander, has a regional airport with daily flights into and out of . Around breaks and holidays, students volunteer to help transport people to and .

WCC is the only private four-year institution of higher education in the state. The college takes no federal aid money, which means the govt. can't tell them how to run things!  The faculty is 100% Catholic ( I honestly wonder how these supposedly Catholic Universities can call themselves Catholic when they have non- Catholics teaching Philosophy & Theology).and the student body  is 98% Catholic.   In the spring of 2016, WCC became the second college in the nation to accept the Classic Learning Test (CLT) as an alternative to the SAT and ACT for college admissions. 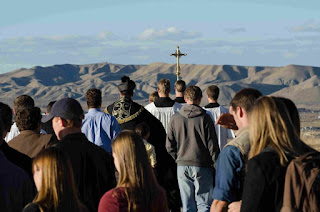 Interestingly enough all freshmen spend 21 days in an intensive wilderness survival program as their first weeks of school, where they hone time management and communications skills and bond with their classmates. Students participate in some kind of an outdoor trip be it camping in the desert, ice climbing or building snow caves,  on average once a semester during their four years at the school.

Bishop Ricken, the former bishop of , said the idea for the college was born out of a dinner conversation with Father Robert Cook, a local parish priest, and Robert Carlson, a professor in the humanities. Carlson had been a student of John Senior, an influential Catholic scholar at the who had written about the importance of re-engaging contemporary students with the natural world.

In the course of their conversation, Bishop Ricken voiced his concerns about how the Church was losing its young people. He wanted a way to reach out to them. Inspired by the work of a at a local college, they decided to launch a summer seminar on Catholic thought, which served as a pilot program for . 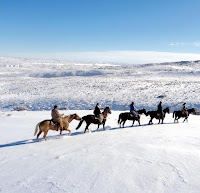 “Just beginning a college is a huge enterprise, as you might imagine, and we started from scratch,” Bishop Ricken said. One of the first steps was an advertisement in the Wyoming Catholic Register seeking land. Bishop Ricken said the founders received 47 responses: Seven wanted to give the college the land it needed; the others were offering it at a discounted price.

We need more truly Catholic colleges if we are to foster vocations to the priesthood and religious life, as well as nurturing Catholic families. 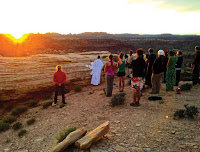 Posted by mother hildegard at 1:50 PM