CHAMPIONS OF ANOTHER KIND

As we watched the opening ceremony of the Olympics, the hope of peace between North and was uppermost in our hearts and we were reminded of champions of another kind on that same soil with the KOREAN MARTYRS. 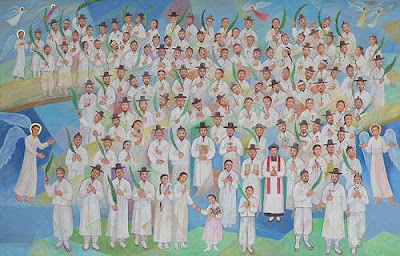 ’s first priest, Andrew Kim Taegon, was born 1821 into an aristocratic Korean family that eventually included three generations of Catholic martyrs. St. Andrews great-grandfather died for his Catholic faith in 1814, decades before the first Catholic missionary priests arrived on the peninsula from .

“The first Christian community in [is] a community unique in the history of the Church by reason of the fact that it was founded entirely by lay people,” said John Paul II at the canonization of 103 Korean martyrs, including Andrew Kim Taegon, in 1984.

“The splendid flowering of the Church in today is indeed the fruit of the heroic witness of the martyrs. Even today, their undying spirit sustains the Christians in the Church of silence in the North of this tragically divided land,” said  St. John Paul II at the martyrs’ 1984 canonization.

St. Andrew Kim traveled over 1,000 miles to attend seminary in . While he was away at seminary, his father, Ignatius Kim Chae-jun, was martyred for his faith in 1839. 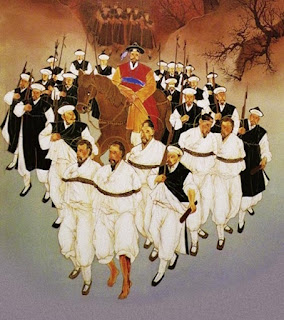 After St. Andrew was ordained in in 1845, he returned to his homeland to begin catechizing Koreans in secret. Only 13 months later, he was arrested.
In his final letter from prison before he was tortured and beheaded, he wrote to Korean Christians:

"Dearest brothers and sisters: when he was in the world, the Lord Jesus bore countless sorrows and by His own passion and death founded His Church; now He gives it increase through the sufferings of His faithful. No matter how fiercely the powers of this world oppress and oppose the Church, they will never bring it down. Ever since His Ascension and from the time of the apostles to the present, the Lord Jesus has made His Church grow even in the midst of tribulations...I urge you to remain steadfast in faith, so that at last we will all reach heaven and there rejoice together. I embrace you all in love."

“St. Andrew Kim Taegon exhorted believers to draw from divine love the strength to remain united and to resist evil,” said Pope St. John Paul II on his third and final papal trip to , in 2001.

During a century in which an estimated 10,000 Christians were martyred in during waves of persecution by the Chosun Dynasty, Christianity continued to grow.

In 1989, at ’s Olympic Gymnastics Hall, Saint John Paul II again pointed young people to look to those martyrs, as the Korean people continued to grapple with the peninsula’s division.

“Your martyrs, many of them of your own age, were much stronger in their suffering and death than their persecutors in their hatred and violence. Violence destroys; love transforms and builds up. This is the challenge which Christ offers to you, young people of , who wish to be instruments of true progress in the history of your country. Christ calls you, not to tear down and destroy, but to transform and build up!” the Pope said.

“The Korean nation is symbolic of a world divided and not yet able to become one in peace and justice,” the Pontiff said on the same papal trip, “yet there is a way forward. True peace – the shalom which the world urgently needs – springs eternally from the infinitely rich mystery of God’s love.” 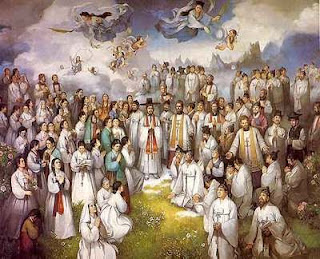 “As Christians we are convinced that Christ’s Paschal Mystery makes present and available the force of life and love which overcomes all evil and all separation,” St. John Paul II continued. “the Eucharist is the sacrament of Christ’s “peace” because it is the memorial of the salvific redemptive sacrifice of the Cross.”
Posted by mother hildegard at 10:22 AM