ANOTHER HOLY DOCTOR- A SAINT OF TODAY

The second physician named venerable is  PEDRO HERRERO RUBIO, a Spanish layman and pediatrician who dedicated his life to the medical and spiritual needs of his young patients and their parents. He died in in 1978. 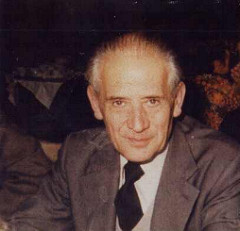 He was born in 1904 in , where his father was an official . He began to study with the Marist Brothers but his father was assigned to Orihuela in 1917 so  he finished high school  with Jesuits.  In 1924 he moved to Madrid where he began studying at the College of Surgery of San Carlos of the Central University.

He was a student of the Nobel Prize winner, Santiago Ramón y Cajal, and of the future President, Dr. Juan Negrín. Graduating in 1927 he specialized in Pediatrics and Obstetrics.
iWith a state scholarship he went to the University of Paris to study.

Back in Alicante he applied to the Medical Association and began working as a doctor of childhood diseases in the dispensary of the Spanish Red Cross.

In 1931 he married Patrocinio Javaloy Lizón and while they had no children of their own, his reputation as "children's doctor", especially the disadvantaged,  began to be known. He gave them medicine and also helped them with his own money, baptizing them even. He was known among his colleagues to be of the highest moral authority.

The religious persecution during the thirties did not prevent him from continuing his Christian life from the underground. He was arrested in 1937 because of his Catholic status but was released at the request of a commission of women, workers and militiamen from , alluding to his generous dedication to the poorest.

Venerable Pedro died in 1978 in undergoing emergency surgery due to an intestinal obstruction. At his funeral the bishop of spoke of him as "a saint of today".  With both of these modern holy doctors and their care of the sick, one is reminded of St. Giuseppe Moscati.