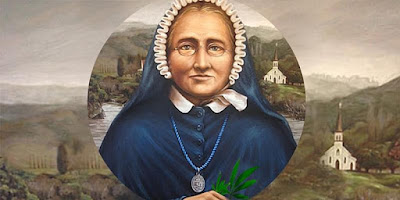 Having grown  and studied the uses of medicinal (as well as culinary) herbs for many years at our Mother Abbey, this new venerable is dear to my heart.

VENERABLE SUZANNE AUBERT (Sister Mary Joseph or Mother Aubert), was a Catholic sister who started a home for orphans and the under-privileged in Jerusalem, New Zealand on the Whanganui River in 1885.

Mother Aubert first came to in 1860 and formed the Congregation of the Holy Family to educate Māori children. She founded the Daughters of Our Lady of Compassion in 1892. She later started two hospitals in Wellington.

She cared for children and the sick, by skillfully combining Māori medicine and Pākehā (European) science, and wrote books in Māori, English and French adding significantly to a higher cultural understanding and literary heritage.

Mother Aubert was actively engaged with the local Māori population and spoke Māori well. She wrote a book New and complete manual of Maori conversation, containing phrases and dialogues on a variety of useful and interesting topics, together with a few general rules of grammar  and a comprehensive vocabulary.

When Mother Aubert died in 1926, her funeral was believed to be one of the largest in the small country’s history. Not only did she tend to the sick, but she also helped keep the her community afloat by selling medicines and other apothecary goods. She diverged from Western medicine traditions, seeking out ways to combine those doctrines with Māori medicine. 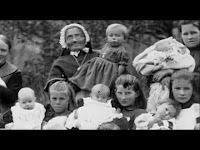 Marie Henriette Suzanne Aubert was born in 1835 near . She was educated by Benedictine nuns at La Rochette in .  Following the 19th century French custom among middle-class and upper-class families, Marie’s parents had arranged her marriage to the son of a family friend.  Marie however refused to comply. She then sought the support of the much-respected Jean-Marie-Baptiste Vianney, parish priest of Ars and later St Jean Vianney, who told her she had made the right decision that God had other designs for her.

In 1860 at age 25,  she sailed to with Bishop Jean Baptiste François Pompallier and a number of other Catholic missionaries recruited during his year-long visit back to . Here, in New Zealand Marie Aubert served the sick, orphaned, elderly and those ‘unnoticed’ by society. 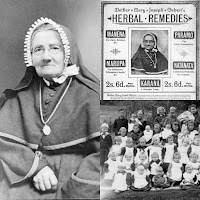 She established ’s first soup kitchen that still serves almost 40,000 meals a year. She established orphanages for abandoned children and provided care for the handicapped, the sick and the dying. She was a pioneer of ’s health and welfare system and a friend to Māori throughout her life. 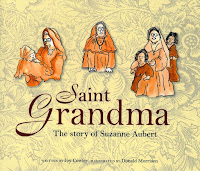 She founded the Daughters of Our Lady of Compassion in 1892.  It was the only Catholic congregation born and growing to maturity in .

In addition to their religious life, the sisters taught and nursed, farmed newly cleared bush, tended an orchard, made and marketed medicines, sold fruit to tourists and raised homeless children,  and as a result the community grew and thrived. Much of their income came through the sales of Mother Aubert's medicinal formulations, including many cannabis-based medicines. She is the first person known to grow cannabis in .  This interesting fact is not why she has been declared venerable!