I was taught by sisters of St. Joseph of Carondelet, the first of the nuns to come to the in 1836.  I had two friends in the St. Joseph of Orange Order (established in in 1912) , and in fact thought of joining them myself, to become a doctor and  be off to their missions in the .  But the Lord later called me to a more contemplative life.  Imagine my surprise when I I recently came across this fascinating story of 4 sisters who wound up fleeing the Solomons. 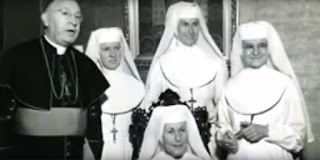 Four sisters of this congregation became stranded behind Japanese enemy lines during World War II. Two of the Sisters were teachers, and two were nurses. They had arrived in the in December 1940. These young women were new to missionary life, confronting an unknown culture for the first time, and did not speak the languages spoken on the various islands. Also, they had to learn how to get around the jungle. One year after they arrived, the Japanese attacked .

The Japanese quickly occupied many of the islands in the South Pacific. The sisters had been deeply involved in a village on the . They had no idea that the Japanese wanted Buka for an airfield.

Sister Hedda Jager was the one who recorded their daily lives in journals. No matter what kind of day she was having, she always managed to record the day’s happenings.

As the Japanese got closer and closer, Sister Hedda recorded how these young religious changed from working as missionaries to being filled with "holy" terror. They made it to where they learned  how other missionaries in the Solomons had been tortured and executed.

There were Marist missionary priests on the island and, knowing what the fate of the nuns would be if captured, they managed to hide the sisters for months in the jungle. On New Year’s Eve 1942, the priests managed to get the sisters and 25 others to the beach in . It was then they all learned that a submarine would be their means of rescue. (That would have finished me then and there!)

On New Year’s Day 1943, in the early morning darkness, the submarine Nautilus pulled to within 100 feet of the beach and the terrified passengers were safely taken on board and brought to safety.

Sister Hedda wrote in her journal: “You cannot put into words the feeling that one has for those of one’s own country, especially when one is miles from home and running away from the Japanese.”

When the war ended the four Sisters returned to Buka to continue their work. The last of them passed away in 1999. Lives given for their adopted people.

Sister Hedda’s journals have been published in book-form under the title Trapped in Paradise .


Included in the 300-page book are maps, photos, biographies of key individuals in the story, a glossary, and a book guide. “War Comes to Buka” by Father Joseph Lamarre, the sisters’ pastor, is also included. He provides his account of 30 months in a Japanese prison camp, describing what the sisters may have experienced had they not been rescued by submarine.