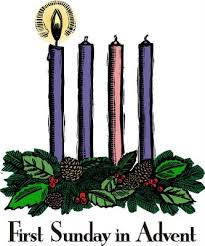 Today we begin  preparation for the Nativity of the Lord by the lighting of the first candle on the Advent wreath in our Chapel. For me it is a special remembrance of a time when I visited the newly "freed" East Germany.  My friends  took me to a very famous artist's home,  primitive but lovely, hidden in a deep woods.  He did pottery among other arts.  I chose a ceramic advent wreath which would hold the 4 candles as well as some greens. It was a lovely blue-green and made from local clay,  Sad to say the artist died soon after my visit.

The Advent wreath is a Christian tradition that symbolizes the passage of the four weeks of Advent in the liturgical calendar of the Western church. It is usually a horizontal evergreen wreath with four candles. Beginning with the First Sunday of Advent, the first candle is lit.  Monasteries traditionally do this on the Saturday before just before the first Vespers of Sunday. An additional candle is lit during each subsequent week until, by the last Sunday before Christmas, all four candles are lit.

The Advent wreath originated a few hundred years ago among the Lutherans of eastern . It probably was suggested by one of the many light symbols which were used in folklore at the end of November and beginning of December. The Christians in medieval times kept many of these lights and fire symbols alive as popular traditions and ancient folklore.

In the sixteenth century the custom started of using such lights as a religious symbol of Advent in the houses of the faithful. This practice quickly spread among the Protestants of eastern  and was soon accepted by Protestants and Catholics in other parts of the country. In modern times the tradition is found in all catholic countries.

The traditional symbolism of the Advent wreath reminds the faithful of the Old Testament, when humanity was “sitting in the darkness and in the shadow of death” (Luke 2:79); when the prophets, illumined by God, announced the Redeemer; and when the hearts of men glowed with the desire for the Messiah. The wreath — an ancient symbol of victory and glory — symbolizes the “fulfillment of time” in the coming of Christ and the glory of His birth. 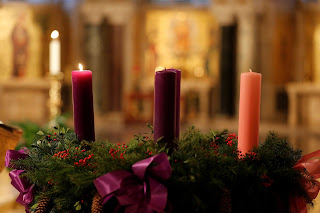 In our monastery Mother Prioress lights the first candle  and the following Saturday the next nun in rank. Because we immediately pray Vespers, no specific prayers are said, but in many Churches and homes there are  special prayers.

On the First Sunday of Advent, the father of the family blesses the wreath, praying: O God, by whose word all things are sanctified, pour forth  Your blessing upon this wreath, and grant that we who use it may prepare our hearts for the coming of Christ and may receive from You abundant graces. Who lives and reigns forever. Amen”.  The youngest child then lights one purple candle.

During the second week of Advent, the father prays: O Lord, stir up our hearts that we may prepare for Your only begotten Son, that through His coming we may be made worthy to serve You with pure minds. Who lives and reigns forever. Amen.” Another child then lights the purple candle from the first week plus one more purple candle.

During the third week of Advent, the father prays: O Lord, we beg Thee, incline Your ear to our prayers and enlighten the darkness of our minds by the grace of Your visitation. Who lives and reigns forever. Amen.” The mother then lights the two previously lit purple candles plus the rose candle.

Finally, the father prays during the fourth week of Advent, O Lord, stir up Your power, we pray You, and come; and with great might help us, that with the help of Your grace, Your merciful forgiveness may hasten what our sins impede. Who lives and reigns forever. Amen.” The father then lights all of the candles of the wreath.

Since Advent is a time to stir-up our faith in the Lord, the wreath and its prayers provide us a way to augment this special preparation for Christmas. This  tradition helps us to remain vigilant in our homes and not lose sight of the true meaning of Christmas.

The message from Pope Benedict XVI is very clear as to why we have these four weeks of preparation- beyond the hustle and bustle of material  concerns.

"Advent is a time of openness to God’s future, a time of preparation for Christmas, when He, the Lord, who is the absolute novelty, came to dwell in the midst of this fallen humanity to renew it from within. In the Advent liturgy there resounds a message full of hope, which invites us to lift up our gaze to the ultimate horizon, but at the same time to recognize the signs of God-with-us in the present. The Lord wants to do in Advent: to speak to the heart of His people and, through them, to the whole of humanity, to proclaim salvation."