As we prepare for the great feast of our patron St. Benedict, I present this possibly next Benedictine saint. SERVANT OF GOD  BROTHER MARINUS LEONARD LaRUE, could be the latest Benedictine to be canonized, if not the first American Benedictine. 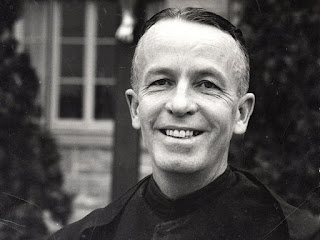 Brother Marinus Leonard LaRue, who as a merchant marine captain in the Korean War, evacuated 14,000 refugees from a besieged North Korean port.

Three days before Christmas 1950, Captain LaRue came upon what he likened to ''a scene of Dante's Inferno'' at the port. On Christmas Day, he delivered all 14,000 refugees to safety on a South Korean island some 500 miles away aboard a freighter designed to hold only 60 people. The United States Maritime Administration called his feat ''the greatest rescue by a single ship in the annals of the sea.''

Captain LaRue was the skipper of the 455-foot Meredith Victory, a Moore-McCormack Lines freighter that had been carrying supplies to American servicemen in on behalf of the Navy.

In December 1950, the Meredith Victory was summoned to the North Korean port , which was jammed with 105,000 American and South Korean marines and soldiers and more than 90,000 North Korean civilians retreating from a Chinese Communist onslaught at the Chosin Reservoir. About 200 American vessels had converged on for evacuation while American ships and planes bombarded the perimeter to hold off Communist troops.

When Captain LaRue was peering through his binoculars, he surveyed the heartbreaking scene from the deck of his ship.  Thousands upon thousands of Koreans, men, women and children, with their eyes filled with fear,  were crammed onto the docks of the City of Hungnam, desperate to flee the invading Chinese and North Korean communist forces that were closing in quickly during those early months of the Korean War. Captain   LaRue made the decision to unload nearly all of the arms and supplies on the ship in order to board as many refugees as possible, ordering the ship to be made ready to hold the refugees, so that they could evacuate as many as possible out of .


Time was of the essence for Captain LaRue and the brave crew of his U.S. Merchant Marine cargo freighter, the SS Meredith Victory, to save as many of those ragged and frightened refugees as possible. Artillery fire roared above them, as they wasted no time in loading their new passengers, who took only what they could into the ship’s hold and on deck and then steamed out of port and imminent danger. Armed with courage and compassion, the captain and crew risked their lives to transport their new precious cargo, the last remaining 14,005 refugees,  on a perilous 450-mile voyage through treacherous mine- and submarine-infested waters to the safety of .  The mission, undertaken against all odds, has been called a “Christmas Miracle” by historians, in fact, the largest humanitarian rescue operation by a single ship in world history.

The refugees had little food or water and there were no blankets or sanitary facilities. The crewmen gave their coats to the women and children, but the misery was unrelieved. At one point, young men came topside seeking food, and a riot seemed imminent.

After a treacherous voyage though the Sea of Japan, the freighter arrived at on Christmas Eve, only to be turned away by South Korean officials, who were trying to cope with refugees already there. Captain LaRue was  told to head for the , 50 miles to the southwest.

The SS Meredith Victory had sailed south with no equipment for mine, no doctor or interpreter on board, no lighting or heat in the holds, no sanitation facilities, and no military escort. The only gun on the entire ship as it traveled south was the pistol in Captain LaRue’s pocket.  In spite of the fact that the refugees were packed together tightly, with most people having to stand up, shoulder-to-shoulder silently and nearly motionless in freezing weather conditions during the entire voyage, there was not a single injury or casualty on board.  Five babies were born during the rescue sailing.

The people were virtually unable to move, and there was very little food or water.  The ship arrived in Busan on Christmas Eve and then headed to its final destination, , arriving there on Christmas Day.

Not one refugee died in the evacuation; the number of Koreans aboard had, in fact, increased by five babies. 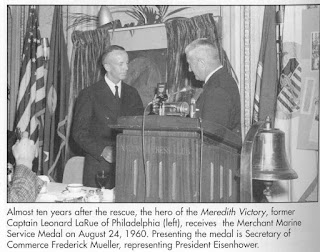 Captain LaRue, a native and a veteran of World War II merchant marine operations in the , remained in command of the Meredith Victory until it was decommissioned in 1952. He received American and South Korean government citations for his rescue work, and the Meredith Victory was designated a Gallant Ship by Congress.
In 1954, Captain LaRue left the sea to join the Benedictine congregation of St. Ottilien at ’s Abbey in . He made his first profession on Christmas Day, 1956, and took his final vows at the Christmas midnight Mass three years later. The name he chose, Marinus, was both a tribute to the Blessed Virgin Mary and an appropriate appellation for a man of the sea. He performed the menial tasks of washing dishes, working in the gift shop and ringing the abbey’s bell each morning. After having suffered for years from a lack of mobility and dementia, Brother Marinus died on 14 October 2001.

“He always had a soft spot for the downtrodden,” recalls his last abbot, Father Joel Macul, OSB. “If a poor person would come to the door, he always would want to help. Sometimes he would go to the kitchen after hours and maybe put a food bag or something together.”

Brother Marinus spent his days serving others at the monastery. Rarely did he speak of his heroic rescue of 14,000 people and preferred that others not ask about it.


''I was always somewhat religious,'' he reflected a decade after carrying out the Korean evacuation. ''All the things in my life helped to cement my determination to enter the monastery.''

But he looked back on the rescue as a turning point in his life. ''I think often of that voyage. I think of how such a small vessel was able to hold so many persons and surmount endless perils without harm to a soul. The clear, unmistakable message comes to me that on that Christmastide, in the bleak and bitter waters off the shores of Korea, God's own hand was at the helm of my ship.''


This statement is an example of Brother Marinus’ humbleness. I do not think it is a coincidence that Captain LaRue saved 14,000 Korean refugees and, decades later, Brother Marinus’ Abbey is saved from closing by the arrival of Korean monks,” Bishop Arthur Serratelli  (Bishop of Paterson, NJ) wrote. 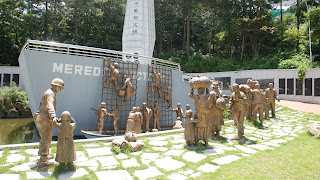 Posted by mother hildegard at 10:09 AM