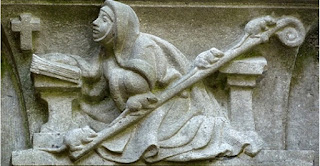 Here are on Shaw, we  have always prided ourselves that we never saw a rat- field mice yes and they freely roam, never doing much damage, but rats???  Never, until this year and they seem to have invaded our small paradise, especially in the chicken feed shed!  We have set out traps but they seem to be too wily for our schemes. So I am praying to ST. GERTRUDE of NIVELLES a 7th century Benedictine Abbess who lived in present day . She is not to be confused with another Benedictine, Gertrude who has the title of “the Great.” 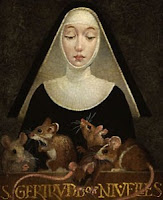 St. Gertrude of Nivelles was born around 626 in present-day into a well-connected noble family. When she was 10, Gertrude reportedly refused to be married to the son of a duke. In fact, she insisted that she would never marry at all.

When her father died, Gertrude and her mother, Itta, moved to Nivelles to set up a monastery, where she became an abbess. She became known for her devotion to scholarly and charitable works, and for taking care of orphans, widows, and pilgrims. She was also visited by spiritual visions and was said to know most of the Bible by heart. But her ascetic lifestyle, which included long periods without food or sleep, took a toll on her health, and she resigned as abbess at the age of 30. She died three years later, and St. Patrick himself is said to have watched over her on her deathbed.

The connection between St. Gertrude and rodents became solidified as veneration of her spread throughout northern Europe, and little silver or gold statues of mice were left at a shrine to her in as late as 1822. By then, she had become the saint one asked to intercede in the case of a rodent infestation. It was said that the water from her abbey’s well would chase away rats and mice.

Her feast is March 17 also the feast day of St. Patrick, who seems to have overtaken her in popularity.  St Gertrude is  also the patron saint of cats, but I am not praying for cats at this point.  We have several, and all but one seem to have lost their appetite for rodents.

Posted by mother hildegard at 3:59 PM