VENERABLE MOTHER ANTONIETTA GIUGLIANO is another American who spent most of her life in another country.  Her life is  witness of a life given to God and the care of others  and to her unshakable hope.

She was born in on July 11,1909. Her parents had emigrated from Afragola, a town in the of , , to the some years before. Her mother died when Antonietta was five years old so her father moved the family back to .

Her father wanted his daughter to receive a religious education, so left her in the care of the Sisters of Charity of Regina Coeli in where Antonietta spent her childhood and adolescence.

At sixteen years of age her inner life prayer life deepened and  the seed of a religious vocation began to ripen in her.

Her widowed father had in the meantime remarried and the family had ambitious projects for the young girl. They wanted a marriage suited to her social and financial standing. She was also a beautiful girl with flowing black hair and big black eyes, which revealed her deep inner life and foreshadowed a radiant future.

But her heart longed for wider horizons. She started reading the Imitation of Christ, praying with the Bible and meditating on the life of  St. Theresa of the Child Jesus. Her intelligence and her openness to the will of God made her soon realize that there was a special call in store for her.

One day Antonietta visited a cousin, a missionary Sister living in but passing through Afragola. In that meeting Antonietta saw a sign from God. She was excited at the thought of the great deeds of charity that could be carried out in mission lands (At that time Pope Pius XI was giving great attention to missionary work). Perhaps, she thought, bringing the Good News to faraway lands was the answer to that need for total self-giving she felt so strongly in her heart. 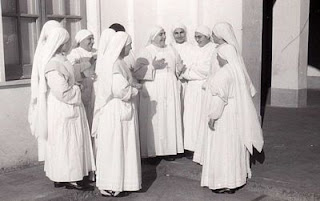 Humility and the awareness of her limitations convinced her that she should seek advice from a priest, Giuseppe Romanucci, who was also her cousin.

Antonietta had recently lost her father and inherited a large patrimony, even though she was still too young to come into possession of it.  She met Father Sosio Del Prete, the of the Franciscan Convent of Saint Anthony and opened her heart to him.  He was struck by Antonietta's enthusiasm, her complete self-giving to God, her strong faith and by her progress on the road of perfection

He was able to perceive in Antonietta the spiritual strength and generosity needed to minister to the old and less fortunate people of Afragola. From this time on the lives of the two founders are intimately intertwined. Together they gave birth to the apostolate of the Little Servants of Christ the King.

Antonietta received the religious habit from Cardinal Alessio Assalesi in,1935. She took as her rule of life, the rule of the Third Order Regular of Saint Francis. She gave herself totally to the growth and the strengthening of the new religious family, which she guided as first Superior General till her death. She was a wise , protecting her religious family with courage and strength during difficult and stormy times. 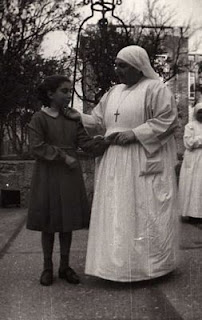 She accepted with Christian faith and courage the sickness that cut her life short when she was barely fifty years of age in 1960 in .

Venerable Mother Antonietta Giugliano was a contemplative in action.


Posted by mother hildegard at 9:21 AM