Another living missionary, who is having a great impact on the peoples of is FATHER PEDRO PABLO, who was born in 1948 in Argentina of Slovene descent. For his service to the poor, he was awarded the Legion of Honor. 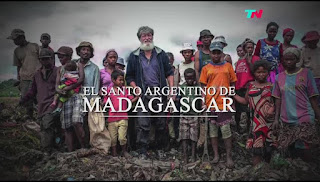 His father was a former member of the Home Guard, a Slovenian anti-communist German-led auxiliary police force, and avoided post-war summary executions by fleeing to Italy. He met his future wife in a refugee camp in Italy, where they married. They emigrated together to to avoid the Yugoslav communist regime.

In 1968 he joined the Lazarites a missionary order popularly known as Vincentians, founded by St. Vincent de Paul. Part of his formation was in and part in , where he came into contact with the Taizé Community near Cluny in . 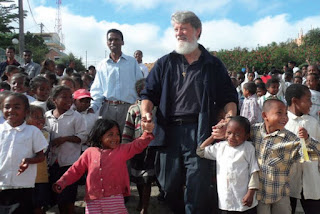 In 1975, Pedro Opeka was ordained priest in and was given a rural parish in southeast . In 1989, his Lazarist superiors appointed him director of a seminary in Antananarivo, the capital.

Father Opeka  has described Madagascar as “a precious island, with much natural riches and a very happy and welcoming people that live solidarity and mutual help with great respect.”

When he saw a dump from the hills of the city, he discovered people rummaging among garbage to find something to eat, and sleeping in huts made of hemp propped between mountains of waste. Father Pedro began talking to them, to convince them that they could leave that misery and abuse, for their children. With the team of young people from Vangaindrano he had trained, and after long discussions, he wrote the articles and statutes of Akamasoa ('good friends' in the local language).

“From the beginning, the wisdom of its ancestors surprised me as well as the richness of its culture, and in its proverbs the presence of the Creator God is always present. The Malagasy people are very religious, and one grows attached to them very quickly.

He said much has changed since he first arrived. “When I came to this island it was an extraordinary discovery to live in the midst of a people that have an immense enthusiasm to live, to exist, to share. They had respect for persons and for goods, there was almost no delinquency, no robbery or violence.”

Looking back, Father Opeka notes that after the island gained independence in 1960, its socioeconomic and political situation began to deteriorate, while its population continued to increase. “From year to year, we were sinking into poverty without there being any reaction on the part of those governing. All those who took power ended up defrauding the people.”

Having no money, Father Pedro started it all with 900€ he borrowed from various Christian missions. He appointed a team of staff to help him to manage the daily activities and to provide continuous support to poor people.

Today Akamasoa sustains about thirty thousand people in 18 villages, among them ten thousand children, who all go to school, following the building of 37 new schools in the years since Akamasoa's founding.

About four thousand families live in the 18 villages, but another 900,000 Malagasy people have been supported from one day to three weeks in the 'welcome centers', being offered rice, a roof, some clothing and a small package, in order to be 'born again' to life. 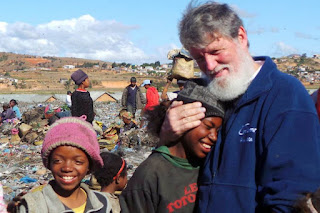 Son of a courageous father who taught him building arts, Father Pedro taught the Akamasoa youth how to build houses, first out of wood, and then, bricks and mortar.
Over 3,000 solid houses have been built by Akamasoa to date for people who used to live in card-board boxes on the ground. Every year, Akamasoa builds new schools, clinics, and training and production centres. Over 3,600 jobs have been created for the villagers, who are paid by Akamasoa every month.
A comprehensive economic structure, Akamasoa has grown to being 75% self-sufficient in revenue, thanks to the creation of stone and gravel quarries, to the craft and embroidery workshops, and to a compost centre next to the 'Tana' public rubbish.

Father Pedro Opeka taught the Akamasoa people tips on how to divide and sort the rubbish, to transport the compost created from rubbish, and to create small agricultural farms. Akamasoa also trains construction artisans (bricklayers, carpenters, cabinet makers, operators and street pavers) who have built or rebuilt roads and bridges to help communities in the villages and all over the country.

In 2007,Father Pedro was named a knight of the Legion of Honor. The award, decreed by the President of France, recognizes his 20 years of public service to the poor in . This award recognizes the ongoing fight led here against poverty by this man of faith and his 412 co-workers: physicians, midwives, teachers, engineers, technicians, and social workers, all of them from .

In 2009 he received the Golden Order for Services, which is the highest national decoration of Slovenia.

In 2012 and 2013 Father Pedro was nominated for the Nobel Peace Prize by united Slovenian European Parliament representatives regardless of political party affiliation.

Father Pedro has seen much change in this country since his arrival over 30 years ago, and not for the better, but he sees a glimmer of hope for the nation because “a young president has come to power who seeks to change and to bring peace and social justice to his people.”

Andry Rajoelina,  has begun to attack the corruption and the whole class of favoritisms that impede the country’s economic growth.

“The new president is Catholic and does not hide his faith and for many years now he has come to celebrate Christmas with the poor families of Akamasoa.”

Asked about the role of the Catholic Church on the island, Father Pedro said, “The Church has played an important role in the history of . It was the cradle of the education of children in the whole national territory. Indeed, the missionary presence was very important because it brought education, health, dignity.

The force of the Gospel was what kept the hope of the poorest. Without the presence of the church, would be very much poorer.”

This gentle man of God is an example of one who has given up all to follow Christ as he makes a difference to the neglected poor of an almost forgotten country. To many he is known as the "man of miracles".

Posted by mother hildegard at 2:14 PM