Yesterday, Pope Francis opened the Extraordinary Missionary Month invoking St. Therese of Liseux, the patron saint of missionaries.   “Saint Therese of the Child Jesus shows us the way: she made prayer the fuel for missionary activity in the world.”

“This is also the Month of the Rosary: how much are we praying for the spread of the Gospel and our conversion from omission to mission?... do not forget that prayer is the real soul, the beating heart, of all missionary work of the Church.’”

Pope Pius XI declared St. Therese of Liseux,  the patroness of missions in 1927. The saint, who died at the age of 23, offered prayer and sacrifice for the sake of missionaries and wrote of her burning desire to save many souls in her spiritual autobiography The Story of a Soul.

Frédéric Fornos Fornos, the director of the Pope's World Prayer Network, said at a press conference: “On this day when we celebrate St. Therese of Lisieux, patron of missions, who learned to pray for the mission of the church with the apostolate of prayer, it is beautiful to remember that prayer is a way to love.”

The theme of the Extraordinary Missionary Month is “Baptized and sent: the on mission in the world.” Pope Francis stressed that this means that “no one is excluded from the Church’s mission.” 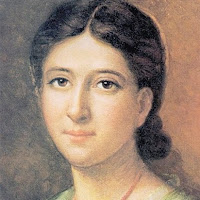 “In this month the Lord is also calling you, because you, fathers and mothers of families; you, young people who dream great things; you, who work in a factory, a store, a bank or a restaurant; you who are unemployed; you are in a hospital bed... The Lord is asking you to be a gift wherever you are, and just as you are, with everyone around you.”

Pope Francis pointed to the example of  Venerable Pauline Jaricot, a 19th century French lay woman who helped to found the Society for the Propagation of the Faith, and supported the Church’s missionary work with the offerings she made from her wages.

“This extraordinary Missionary Month should jolt us and motivate us to be active in doing good.  Can we, who have discovered that we are children of the heavenly Father, keep silent about the joy of being loved, the certainty of being ever precious in God’s eyes? That is a message that so many people are waiting to hear. And it is our responsibility.”

Posted by mother hildegard at 10:22 AM