WHERE O WHERE ARE THE BIRDS? 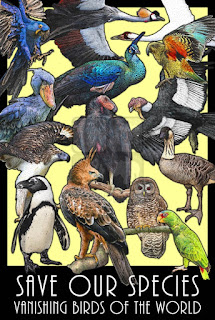 When I throw bird seed onto my deck each morning I see fewer and fewer birds in both species and numbers. Where have they all gone? Two years ago there would be a hundred or more. Now I am lucky to see 20.  There used to be many more species especially sparrows.  Now I have one, the white crowned.

In September scientists reported  that the number of birds in the and  has fallen by 29 percent since 1970. There are 2.9 billion fewer birds taking wing now than there were 50 years ago.

David Yarnold, president and chief executive of the National Audubon Society, called the findings “a full-blown crisis.” Experts have long known that some bird species have become vulnerable to extinction. But the new study, based on a broad survey of more than 500 species, reveals steep losses even among such traditionally abundant birds as robins and sparrows.

The losses include favorite species seen at bird feeders, such as Dark-eyed Juncos (or “snowbirds,” down by 168 million) and sweet-singing White-throated Sparrows (down by 93 million). Eastern and Western Meadowlarks are down by a combined 139 million individuals. Even the beloved Red-winged Blackbird—a common sight in virtually every marsh and wet roadside across the continent—has declined by 92 million birds.

“We want to keep common birds common, and we’re not even doing that,” said Pete Marra, a study coauthor who formerly directed the and now directs the Georgetown Environment Initiative.

So what is exactly going on? There are likely many causes, the most important of which include habitat loss and wider use of pesticides. “Silent Spring,” Rachel Carson’s prophetic book in 1962 about the harms caused by pesticides, takes its title from the unnatural quiet settling on a world that has lost its birds:

“On the mornings that had once throbbed with the dawn chorus of robins, catbirds, doves, jays, wrens, and scores of other bird voices, there was now no sound.”

Like the honey bee, which is also loosing ground in nature, we can see that common species of birds are vital to ecosystems They  control pests, pollinate flowers, spread seeds and regenerate our forests. When these birds disappear, their former habitats often are not the same.


And while we can put blame on the use of pesticides, certainly habitat loss is a major factor. Grassland species have suffered the biggest declines by far, having lost 717 million birds. These birds have probably been decimated by modern agriculture and development.  They’ve lost 700 million individuals across 31 species, equivalent to a 53 percent population loss since 1970.


Forest-dwelling birds, which are more abundant, lost one billion individuals. Shorebirds, which traverse across full hemispheres during migration, are “experiencing consistent, steep populations loss” at a rate of 37 percent in less than 50 years.

“Declines in your common sparrow or other little brown bird may not receive the same attention as historic losses of bald eagles or sandhill cranes, but they are going to have much more of an impact,” said Hillary Young, a conservation biologist at the  of , . 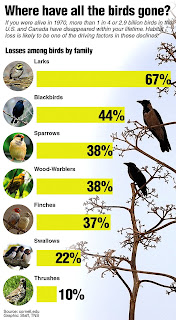 Among the worst-hit groups were warblers, with a population that dropped by 617 million. Vireos which share the same habitat are thriving and no one knows why.

There are 440 million fewer blackbirds than there once were. Even starlings, a species that became a fast-breeding pest after its introduction to the in 1890, have dwindled by 83 million birds, a 49 percent decline. is experiencing a similar loss of birds, also among common species.


Scientifically speaking, birds are considered indicator species, or animals used to infer the health of an entire ecosystem. They are worldwide “canaries in the coal mine,” which refers to the 20th-century practice of carrying caged birds into mines to detect toxic gases before humans suffer harmful effects.

Roger Tory Peterson called birds “an ecological litmus paper.” They are crucial to the health of many ecosystems, and their populations anticipate the health of whole environments.


While all of this is bad news, researchers found some positive signs. Bald eagles are thriving,  falcon populations have grown by 33 percent and waterfowl are on the upswing.

Many recovering bird species that were nearly wiped out in the last century by pesticides, hunting and other pressures  have been saved by conservation.   This shows that we have the power to save other species.


Posted by mother hildegard at 9:48 AM