Since Asia (especially ) is so much in the news these weeks with the outbreak of the deadly  coronavirus, I thought I would focus in February on new saints in lesser known areas of this continent. And while most of them are martyrs, I want to start with an artist.

It never ceases to amaze me how there is a thread that runs through life, connecting people, places and ideas, when we least expect them.  Of late, perhaps since the Olympics in in 2018, we have learned more and more about the people of this country. One of our interns lived in as a child and speaks the language. Their food has always been one of my favorites, since my early days living in .

The man who donated our land here on Shaw, 40 years ago gave us a subscription to “Koreana” a magazine, which is published quarterly in 11 languages to promote Korean arts and culture around the world.  We always look forward to it, especially for its lovely art- ancient and new. So I was interested to find a new artist from that country  and to see that he has connections with the state of our Abbey.  I especially like his Good Shepherd and Mary washing the feet of Christ. 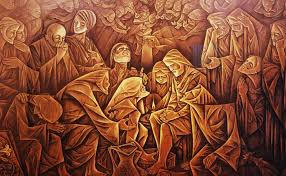 KIM YOUNG GIL was born in 1940 while his family was seeking refuge in province, . His Christian family fled from under Japanese colonization as they were forced to visit Shinto shrines to worship Japanese spirits.

After became independent, his family returned to . He attended to study Visual Arts. While at school, he won the first prize at the Sydney International Art Contest with a painting titled "Upper Room". This had a great impact on his life as he later decided to devote his talent only to draw Christian paintings.

He executed a wall painting "Jesus Washing the Feet of His Disciples" at the and contributed to the construction of the memorial building for the martyrdom of Pastor Son Yang-Won ***,  executing 68 paintings there.

He led more than 2000 seminars and had over 30 inviting exhibitions in Harvard, Yale and .

He was granted the honorary citizenship of the city of , , as well as . 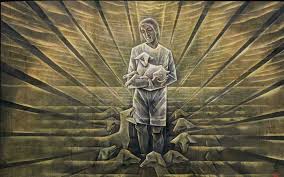 In his forties, along with his wife, Min Haeng Yang, he opened up his home to people with physical and/or psychological disabilities; his house was named "House of Salt".

Kim Young Gil suffered from high blood pressure in his later life, and died of Parkinson's disease in 2008 at the age of 68.

*** Pastor Yang Won Sohn, who cared for the lepers was imprisoned for refusing to worship at Japanese war shrines.  In October 1948, two of his sons were killed by leftist soldiers in a rebellion against the ruling authorities.   He not only gave thanks that his two sons were martyred and were in Heaven at the side of the Lord, but he forgave the rebel who killed his two sons, adopting him as his own son.
Pastor Yang Won Sohn did not evacuate even during the Korean War. He was eventually martyred by the North Korean communist soldiers at the age of 48.

Posted by mother hildegard at 11:40 AM