This week we have celebrated the feast of St. Paul Miki and companions, martyrs of .  Lesser known saints and martyrs are from , (now Myanmar) and .

BL. NICHOLAS BUNKERD KITAMRUNG  was born in Sam Phran, . Raised as a Christian, he entered  the seminary at the age of 13 and was ordained a priest for the archdiocese of in 1926.

After serving a pastor of two parishes, he served as a missionary in northern from 1930 to 1937, giving special attention to the needs of poor Catholics in that region.

Bl. Nicholas fought for the freedom of worship and the right to profess faith in a culture that was Buddhist.  The authorities regarded him with suspicion and accused him of collaborating with the French,  whom the Thai were hostile towards.  He was regarded as a dangerous individual who wanted to incite Thais to rebel against the government of Field Marshal Plaek.

In 1941, as tensions were mounting between the French colonials and the anti-French Viet Minh, which would eventually lead to the Indochina Wars, Nicholas was  accused of being a spy for the French and arrested.


Sentenced to ten years in prison, Nicholas contracted tuberculosis which, combined with the harsh conditions in the prison, led to his death on January 12, 1944. It was later revealed that he spent those years in prison still serving as a missionary among his fellow prisoners, baptizing at least 68 inmates.

Nicholas was beatified in 2000 and is honored as the first martyr-priest of .

Pope St. John Paul II said: “Father Nicolas Bunkerd Kitbamrung’s priestly life was an authentic hymn of praise to the Lord. A man of prayer, Father Nicolas was outstanding in teaching the faith, in seeking out the lapsed, and in his charity towards the poor.”   His feast is celebrated on January 12. 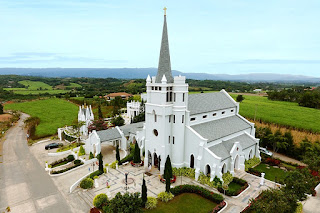 On January 13, 2001 a shrine was dedicated by Cardinal Michael Meechai Kitboonchu to Bl. Nicholas.  The construction was completed in May, 2003. The shrine is located near the place of his birth in Tha Kham sub-district, about 30 kilometers from Bangkok. The shrine contains the Blessed´s relics, along with a museum commemorating his heroic life, in memory of his great contribution to ’s Christian society. At the shrine, on October 11, 2012, Cardinal Kitbunchu blessed the statue of Blessed Nicholas Bunkerd Kitbamrung, erected for the “Year of Faith” to remember the life of the priest, “an example and witness of the faith” in Thailand.

Posted by mother hildegard at 11:15 AM