BL ALFREDO CREMONESI was an Italian priest and member from the Pontifical Institute for Foreign Missions. He studied in Crema and Milan before setting off from Genoa to Naples and then to the Burmese missions via boat. He pledged that he would never return to the Italian mainland and spent the remainder of his life working with the Burmese people in mountain villages despite the great difficulties he faced.

His brother Ernesto was also a devoted Catholic whom the Nazis arrested and jailed in a concentration camp where he would die in 1945 before the European Theater conflict ended. Bl. Alfredo sent a letter to his parents upon learning this and said that "I am proud to be his brother…Ernesto will be able to do more in paradise than he could have done on earth".

Bl. Alfredo had a great devotion to St. Therese of Lisieux, whom he attributed a cure of a childhood ailment. Bl. Alfredo received a special dispensation for his ordination since he had not reached the canonical age required for ordination.

Near the end of the war he was forced to live in the forest where he ate herbs in order to survive. He wrote of the trials he endured during the war in a letter dated on 20 February 1946; he refers to his lack of food and clothing (limited to what he had on) and noting that villages were devoid of people with marketplaces being abandoned. 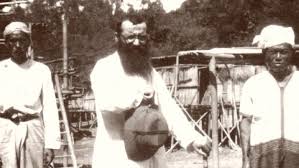 In 1941 he avoided Japanese imprisonment in a concentration camp in India after the Japanese occupied the nation. He lived eating herbs cooked in salt and water during this time but was discovered and caught. In the final month of the war a Japanese officer took him and tied him up for the night before allowing him to leave in the morning where he took refuge in the woods.

Bl. Alfredo did not understand the reason for his release but attributed it to the intercession of God.

The Burmese independence reached in 1948, prompted guerrilla conflict which caused great unrest and destruction to the point that Bl. Alfredo and other missionaries were forced into exile so as to remain safe. But he reached out to the guerillas and received their permission to return to the village he worked in. It was there in that village that government forces mistook him for a rebel - or a supporter of the rebels - and shot him dead alongside the village chief and two girls.

The blessed had a great devotion to  the Sacred Heart and  practiced Eucharistic Adoration each night for one hour before the tabernacle, awaking around 4:00 am in the morning to celebrate Mass.

Pope Francis approved his beatification which took place in Crema on 19 October 2019.  His feast is celebrated February 7.