During the last weeks of Lent I finished:  Pilgrimage & Exile: Mother Marianne of Moloka’i . It is a massive work of almost 500 pages, with at time, minute details that may seem to bog down the story, but in the end it is a well worth journey.  I did a blog on St. Marianne 10/21/2012 at the time of her canonization. In the meantime I had my trip back to last November, plus the "fates" found other connections for me.

My friend Judy drew St. Damian of as her patron for the year and decided to dig into his history.  One of the treasures she found and sent to me was a pictorial history of Kalaupapa. While reading the book on St. Marianne I was able to follow with the photos. It was almost as though I was there. I had visited Kalaupapa, flying in with the mailman, fifty years ago- an experience I never forgot, so the book was very special. 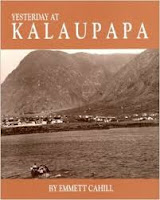 For months I have been trying to rack my brains for the name of the professor at Univ. of I interviewed for a class I took on Literature of the Pacific.  We were to do a book review and in the library I found a book on Moloki’a written by this local. I decided to interview him for the paper.

I vividly remember him but not his name.  When one reads on Kindle, access to authors is not in the forefront of one’s reading as is the case when one holds a book.  While I knew the author of this work on St. Marianne was a nun from her order, I did not realize there was a second author. When I finished the story I was surprised to find a name  that rang a bell, so I looked him up and behold it was my lost professor!

O.A. (Oswald Andrew – Ozzy) BUSHNELL descended from contract laborers from and and a mechanic from . He was born in the working-class neighborhood of Kakaʻako. His friends and classmates in the area were Chinese, Japanese, Portuguese, Hawaiian, and "hapa-haole" (part-white), so he grew up "local," mastering Hawaiian "pidgin" as well as English as his novels attest. As a youngster he developed a love for the cultures of as well as literature and classical music. He graduated in 1934 from the , where he served as student body president.
By 1937 he had earned both his MS and PhD degrees in bacteriology from the of and later worked and taught  at in He returned to in 1940 working for the Department of Health on Kaua`i and Maui before joining the U.S Army after the attack on . Following the war he taught at the , retiring in 1970 as emeritus professor of medical microbiology and medical history.
Dr. Bushnell's first novel, The Return of Lono, won the “Atlantic Monthly’s fiction award" in 1956, at a time when most books about Hawaiʻi were written by outsiders. His later novels dealt with other aspects of Hawaiʻi's history and he encouraged and inspired many other local writers to tell their own stories. Molokaʻi (1960) tells the story of leprosy patients quarantined at Kalaupapa; Kaʻaʻawa (1972) describes life on Oʻahu in the 1850s, during the great smallpox epidemic when many native Hawaiians were dying of newly introduced diseases. In 1974, the Hawaiʻi Literary Arts Council presented him an Award for Literature, saying he "brought life to fact and reality to fiction."

His historical works include : A Pictorial History (1969) with Joseph Feher and Edward Joesting, and A Walk Through Old Honolulu (1975.


His last work, Gifts of Civilization: Germs and Genocide in Hawaii (1993), combined his interests in microbiology, Hawaiian history and literature. It remains the definitive study of how Native Hawaiians, having lived in isolation for centuries, were very nearly wiped out by exposure to newly introduced diseases such as TB, smallpox and leprosy.

Dr. Bushnell was a member of the Historical Commission for the Cause of Mother Marianne. Pilgrimage and Exile, the fruit of his careful research, is the inspiring story of a great and holy woman, who lived a life of extraordinary dedication, sacrifice, and faith.

Today, she continues to remain an example of faith, courage, and spiritual connectedness to all. While Dr. Bushnell did not live to see her canonization, I am sure he was in a place to rejoice with her! And I am glad to have found him again!

Posted by mother hildegard at 10:22 AM