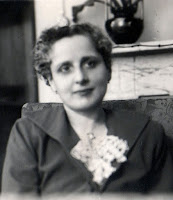 I often tell lay people that we are all called to sanctity. So many people feel that they have to have a vocation to the religious life in order to be a saint. But the Church- the world- needs holy lay people as examples to us all.  One lay woman will soon be beatified.  And she was a Benedictine Oblate.

ITALA MELA (1904-57) was an Italian Roman Catholic who was a lapsed Christian until a sudden conversion of faith in the 1920s and as a Benedictine oblate assumed the name of "Maria della Trinità".

Mela became one of the well-known mystics of the Church during her life and following her death. She also penned a range of theological writings that focused on the Trinity, which she deemed was integral to the Christian faith.

She was proclaimed to be Venerable on 12 June 2014 after Pope Francis approved her life of heroic virtue. The Holy Father also approved a miracle attributed to her which allows for her beatification this year- date is to be announced.

Both of Itala's parents were atheist teachers. She spent her childhood in the care of her maternal grandparents from 1905 to 1915 as her parents worked and her grandparents prepared Mela for her First Communion and Confirmation (thank God for grandparents!).

The death of her brother Enrico at the age of nine in 1920 challenged Mela's faith. She wrote of her feelings to the loss: "After his death, nothing". As a result she eschewed her Christian faith and slipped into atheism. However,  on the Feast of the Immaculate Conception (8 Dec. 1922), she had a sudden reawakening of her faith. She then took the motto: "Lord, I shall follow You unto the darkness, unto death".

Mela became a member of the Italian Catholic Federation of University Students in 1923 where she met future pope Paul VI (Giovanni Battista Montini) and Blessed Alfredo Ildefonso Schuster, OSB (1880-1954), a Benedictine monk who later became Cardinal and Archbishop of Milan during World War II.  At such meetings were Monsignor Montini and the politician Aldo Moro (a  leader of Christian Democracy, he was considered an intellectual and a patient mediator, especially in the internal life of his party. He was kidnapped on March 16, 1978, by the Red Brigades, a Marxist–Leninist urban guerilla organization, and killed after 55 days of captivity). These men and others served as major influences in her life.

She passed her studies in 1922 with recognition of being a brilliant student and was enrolled at the University of Genoa on the following November where she later received a degree in letters and classical studies in 1928.

Itala experienced her first vision of God on 3 August 1928 as a beam of light in the tabernacle in a church of a seminary at Pontremoli, beginning a long stream of visions in her life. She departed for Milan at this time, and chose as her confessor Adriano Bernareggi. She felt a call to religious life but suffered with health problems so in 1933 she became a Benedictine Oblate of the Abbey of Saint Paul outside the Walls in Rome.

As a sign of her new life, Itala took  the name of "Maria della Trinità".  She not only promised the three Benedictine vows of Conversatio, Obedience and Stability, she also made a fourth vow of consecration to the Holy Trinity which she considered as the center of her life and mission in the Church.

She returned to her hometown in 1933 and from 1936 she received ecstasies and visions.

Itala presented an idea for a memorial to Pope Pius XII in 1941, and the pope accepted the Memorial of Mary of the Trinity. In 1946 she composed a series of spiritual exercises for the benefit of the faithful which were well-received.

Itala died on 29 April 1957; her remains were transferred to the La Spezia Cathedral in 1983. While not all  holy people are deemed mystics, or have visions, all Christians are called to be followers of Christ  true to their calling.
Posted by mother hildegard at 8:47 PM