A HOLY FRIEND OF A SAINT

VENERABLE JERZY CIESIELSKI, a close friend of Pope St. John Paul II,  was born in 1929 in . They were close for decades until the Venerable’s death in 1970. 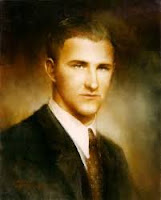 The two first met while he was a student and the then Father Wojtyla invited him to join his youth groups out in the country alongside other students and this was how he met his future wife who would later recall: "Father Karol came with us on trips to concerts, to the theater and the cinema ... we talked during excursions, around the fire and at organized meetings which took place in our homes".

Ven. Jerzy was a civil engineer and worked as a professor at the Tadeusz Kościuszko University of Technology as well as at the University of Khartoum.

Like his friend- the future pope- he loved the outdoors and was an avid sportsman, playing handball, enjoying canoeing, rowing and camping. He played in a basketball team, representing in international competitions. He was a skiing instructor and organized kayaking races in various parts of the country.


In 1957 he married Danuta Plebańczyk officiated by Bishop Wojtyla. The couple had three children.

In 1968 he first came into contact with the Focolare Movement and became quite impressed with their mode of evangelical life that he and Doctor Giuseppe Santacnhé (part of the Italian branch) went to Cardinal Wojtyla for his blessings and also in the hopes of allowing for a Polish-based branch. He joined Focolare in the summer of 1969 after a week-long vacation he spent in Zakopane.

Ven. Jerzy died  with two of his children, his son and a daughter, on the Nile River in the Sudan where he had been teaching.The oldest daughter, Marysia and another young Polish woman were lucky to be saved, as they were on the upper deck, whereas Jerzy had gone down to the cabin to put his children to sleep. Marysia luckily jumped into water and swam to the shore. Kasia, Piotruś and their father, who was such a good swimmer, drowned.  Danuta had stayed back at their hotel. Cardinal Wojtyła returned from  when he heard what had happened and presided at the funerals.

Danuta, in her book ‘Record of a Road’ mentions that when she was returning through Rome with Marysia and with ashes of her husband and children, Karol Wojtyła went to the airport to pick them up, although there were debates of the Bishops’ Synod. Many years later, in 1993 when he arrived in as pope, he mentioned his deceased friend to gathered crowds in Chartum.

The archbishop supported the Ciesielski family spiritually after Jerzy died. Danuta appreciated it in the beautiful words: “How much we owed to the Uncle (the family name for their great friend) – it is impossible to express it in words. We survived the next years really thanks to his prayer and presence”. 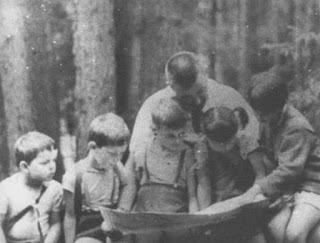 In the book entitled “Going Beyond the Threshold of Peace”, Pope St. John Paul II described Jerzy as a young man who decisively hoped for sanctity.  “This was the program of his life. He knew that he was “created for great things”, but, at the same time, he did not have any doubts that his vocation was not the priesthood or the religious life

Ven Jerzy lived with the maxim: ‘Each of us received a road to take, which is just our vocation. The sense of my existence depends on my faithfulness to this vocation: Your glory and our merit for the eternal happiness. Lord, help me understand my vocation every day and give me Your grace so that I would be faithful to it…’

Posted by mother hildegard at 1:25 PM