Yesterday as we commemorated International Holocaust Remembrance Day, I decided to present a family who perished at the hands of The Nazis defending neighbors.

SERVANTS  of GOD JOZEF and WIKTORIA ULMA, a Polish husband and wife, living in Markowa near Rzeszów in south-eastern Poland during the Nazi German occupation in World War II, were the Righteous who attempted to rescue Polish Jewish families by hiding them in their own home during the Holocaust. 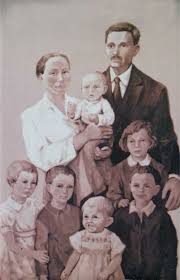 They and their children were executed on 24 March 1944 for doing so. Despite the murder of Ulmas, meant to strike fear into the hearts of villagers, their neighbors continued to hide Jewish fugitives until the end of World War II. At least 21 Polish Jews survived in Markowa during the occupation of Poland by Nazi Germany.

At the beginning  of  the war, Józef Ulma (born in 1900) was a prominent citizen in the . He was a librarian and a photographer, active in social life and the local Catholic Youth Association. He was an educated fruit grower and a bee-keeper. His wife Wiktoria (born Wiktoria Niemczak in 1912), was an educated homemaker. The Ulmas had six children: Stanisława, age 8, Barbara, age 7, Władysław, age 6, Franciszek, age 4, Antoni, age 3 and Maria, age 2. Another child was due to be born just days after the family's execution.

Wiktoria was born in Markowa, the seventh child of Jan Niemczak and his wife Franciszka. At the age of six, Wiktoria lost her mother. She took courses at the folk high school in Gać.  In 1935, she married Józef Ulma, 12 years' her senior. Through hard work, persistence and determination, the Ulmas were able to purchase a bigger farm in Wojsławice near Sokal (now ), and had already begun planning to move when the war began.

In the summer and autumn of 1942, the Nazi police deported several Jewish families of Markowa to their deaths as part of the German Final solution to the Jewish question. Only those who were hidden in Polish homes survived. Eight Jews found shelter with the Ulmas: six members of the Szall (Szali) family from Łańcut including father, mother and four sons, as well as the two daughters of Chaim Goldman, Golda (Gienia) and Layka (Lea) Didner. Józef Ulma put all eight Jews in the attic. They learned to help him with supplementary jobs while in hiding, to ease the incurred expenses.

The Ulmas were denounced by a Ukrainian Blue Police member, who had taken possession of the Szall (Szali) family's real estate in Łańcut in spring 1944 and wanted to get rid of its rightful owners. In the early morning hours of 24 March 1944 a patrol of German police from Łańcut under Lieutenant Eilert Dieken came to the Ulmas' house which was on the outskirts of the village. The Germans surrounded the house and caught all eight Jews belonging to the Szall and Goldman families

They shot them in the back of the head according to eyewitnesses, who were ordered to look at the executions. Then the German gendarmes killed the pregnant Wiktoria and her husband, so that the villagers would see what punishment awaited them for hiding Jews. The six children began to scream at the sight of their parents' bodies. After consulting with his superior, 23-year-old Jan Kokott, a Czech Volksdeutscher from Sudetenland serving with the German police, shot three or four of the Polish children while other Polish children were murdered by the remaining gendarmes. Within several minutes 17 people were killed. It is likely that during the mass execution Wiktoria went into labour, because the witness to her exhumation testified that he saw a head of a new-born baby between her legs. The villagers were then ordered to bury the victims. 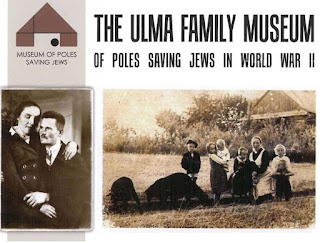 When asked why the children were also killed, the German commander  answered in German, "So that you would not have any problems with them." On 11 January 1945, in defiance of the Nazi prohibition, relatives of the Ulmas exhumed the bodies to bury them in the cemetery, and found out that Wiktoria's seventh child was almost born in the grave pit of its parents.

On 13 September 1995, Józef and Wiktoria Ulma were posthumously bestowed the titles of Righteous Among the Nations by Yad Vashem. On 24 March 2004 a stone memorial to honor memory of the Ulma family was erected in Markowa. Their medals of honor were presented to Józef's surviving brother, Władysław Ulma. Their certificate informs that they tried to save Jews at the risk of their lives, but fails to mention that they died for them, as noted in the book Godni synowie naszej Ojczyzny. 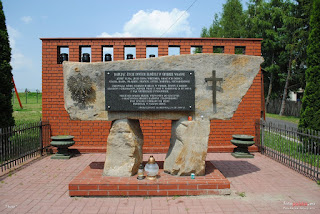 On the 60th anniversary of their execution, a stone memorial was erected in the to honor the memory of the Ulma family. The inscription on the monument reads:
Saving the lives of others they laid down their own lives. Hiding eight elder brothers in faith, they were killed with them. May their sacrifice be a call for respect and love to every human being! They were the sons and daughters of this land; they will remain in our hearts.


A new museum in Markowa, opened in 2016,  is the first museum in dedicated to all Poles who rescued Jews. Until now, there has been no place in to present – in a broader context – the profiles of heroes who risked their lives to help their fellow Jewish citizens facing the holocaust.

The Museum inspired by the fates of the Ulmas shows the history of Polish heroes from the time of the German occupation in 1939-45.

Before World War II, Markowa – the largest village in – was inhabited by nearly 4,500 people, including 30 Jewish families. The heroic attitude of the Ulmas has become a symbol of the sacrifice of all Poles who would save Jews during the war.

There were many more people like the Ulmas. Besides names well-known around the world, such as Irena Sendler and Jan Karski, there were thousands of nameless Polish heroes who would save Jews and have now become forgotten.

Posted by mother hildegard at 10:27 AM