LAMBS ARE HERE- THE GENTLE GIANTS

One of the world's most beautiful and rare sheep comes from the hills of the Cotswolds in England less than 20 miles from the Welsh border. They are thought to be descended from a long wool introduced by the Romans in the first century A.D.  This prototype sheep gave birth to the Cotswold, Lincoln and Leicester. The Cotswold was well established by the 15th Century and the wealth obtained from these "gentle giants" paid for many of the great Cathedrals and churches in England, most notable Gloucester Cathedral, which has the largest stained glass window in all of Britain. Today the Chancellor of the Exchequer still sits on a sack of Cotswold wool in the House of Commons, as a symbol of Britain’s secure wealth.  The word Cotswold stems from the wolds (hills) and cotes (enclosures) which housed the sheep in bad weather, hence the wolds of the sheep cotes. Cotswolds played a great part in early American farming history even though today they are rare. 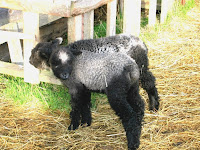 They were first introduced by Christopher Dunn into New York, near Albany in 1832. By 1879 this was the most popular breed in America.  By 1914 over 760,000 were recorded and it was still a very popular breed in the West until Merinos were introduced from Australia. Merinos had the finest  fleece and quick maturing lambs. By the 1980's there were fewer than 600 Cotswolds in all of Britain and in the US in 1993 there were less than 400 lambs registered.  Thanks to the American  Livestock Breeders Conservancy and other groups they have been removed from the "rare breed list" and are enjoying popularity among spinners.

The Cotswold is a large, polled breed, with ewes weighing up to 200 pounds and rams 300 pound. The ewes are excellent mothers, with few birthing problems and quick to accept lambs. Their milk has %14 butterfat.  The meat has a very mild flavor and aroma. It has been proven that long wool sheep have a less mutton flavor than fine wool breeds. Cotswolds are easy to raise and do well on coarser feeds, are excellent foragers, and can thrive in harsh climates, even with a lot of rainfall. In 20 years of breeding this hardy, wonderful breed we have had very few vet bills.


They are a very friendly sheep and there is definitely a queenly quality about the ewes. The rams are known to be very gentle and much less aggressive than rams of other breeds.

The earliest Cotswolds were white but black Cotswolds were recorded in Kentucky in 1858.  They are even rarer than the whites, and it is not known if the incidence of color  is due to  recessive  genes or some fence jumper from long ago!  They should have the same characteristics as the whites.
There is a revived interest in Cotswolds due to the desire of sheep growers to improve wool quality and produce lean, heavyweight lambs on less feed. The Cotswold  can yield 10-12 pounds of wool per shearing with the fiber up to 12" long. It is  highly lustrous fleece with a micron  count in the 40s and is sometimes called “poorman's mohair”.In spite of the heavy grease (lanolin), the fleece washes easily with liquid detergents and hot water and dries rapidly after a spin dry in the washer.

It can be spun uncarded  (we weave a blanket from the unwashed natural locks), flicked, combed or drum carded.  It readily accepts dye and the natural color silver yields lovely heather colors of green, violet and blues.  It blends well with other fibers from alpaca to silk.  The wool is natural for felting as it “cots” easily. It is a favorite with sock knitters and is great for sweaters, scarves, and woven into blankets.

Over the years, while keeping a few whites, we have specialized in the natural colored sheep. We love our "gentle giants".