THE SLAIN MONKS of TIBHIRINE


A difficult, but very moving movie which won much acclaim (Best Foreign Film Academy Awards & Grand Prix at Cannes)  is  OF MEN AND GODS.  It is about eight French Christian Trappist monks who lived in harmony with their Muslim brothers in a monastery perched in the mountains of North Africa in the 1990s. When a crew of foreign workers is massacred by an Islamic fundamentalist group, fear sweeps though the region. The army offers them protection, but the monks refuse. Should they leave? Despite the growing menace in their midst, they slowly realize that they have no choice but to stay... come what may. This film is loosely based on the life of these monks of Tibhirine in Algeria, from 1993 until their kidnapping in 1996.

The story is another of those "stranger than fiction" tales. On the night of March 26-27, 1996, some 20 gunmen invaded the Monastery of Notre Dame of Atlas in Tibhirine and kidnapped its seven Trappist monks, of French nationality. A month later, Djamel Zitouni, leader of the Armed Islamic Groups, claimed responsibility for the kidnappings and proposed an exchange of prisoners to France. The following month, a second communiqué from the group announced: "We have slit the monks' throats." The killings reportedly took place May 21, 1996, and their bodies were found nine days later.


Father Thierry Becker, of the Algerian diocese of Oran, was a guest of the monastery the night that the Muslim fundamentalists abducted Father Christian de Chergé, the prior, and the other six Trappists.

Theirs was "a message of poverty, of abandonment in the hands of God and men, of sharing in all the fragility, vulnerability and condition of forgiven sinners, in the conviction that only by being disarmed will we be able to meet Islam and discover in Muslims a part of the total face of Christ," the priest said.

Father Becker is no stranger to strife in Algeria. He was vicar general in Oran when on Aug. 1, 1996, his own bishop, Pierre Lucien Claverie, 58, was killed along with an Algerian friend, Mohammed Pouchikhi. The Dominican prelate, born in Algeria, had dedicated his life to dialogue between Muslims and Christians. He had such a deep knowledge of Islam that he was often consulted on the subject by Muslims themselves.

"Precisely the desire to welcome one another in truth, brought us together 10 years ago in Tibhirine," said Father Becker. "The meeting 'Ribat es-Salam,' Bond of Peace, was being held in those days, a group of Islamic-Christian dialogue which was oriented to share respective spiritual riches through prayer, silence…."

"The Ribat still exists; it has not given up the challenge of communion with the spiritual depth of Islam. Thus we make our own the spiritual testimony of Father Christian de Chergé, whose monastic choice matured after an Algerian friend saved his life during the war of liberation, while that friend, a Muslim of profound spirituality, was killed in reprisal."

Father Becker continued: "'We are worshippers in the midst of a nation of worshippers,' the Prior used to say to his brothers in community, all of whom had decided to stay in Tibhirine even when violence was at its height."

"In the course of the decades, the monastery stripped itself of its riches, donated almost all of its land to the state, and shared its large garden with the neighboring village. The monks chose poverty, also in the sense of total abandonment to the will of God and of men."

"And great trust was born with the local people, so much so that 10 years after the events, nothing has disappeared from the monastery, everything has been respected. But the future of that holy place is in the hands of the Algerians."


Archbishop Bruno Forte, who participated in a Vatican-organized videoconference on "Martyrdom and the New Martyrs," quoted the "spiritual testament" of the Trappist Prior. He described it as a "splendid example of how martyrdom is the crowning of a whole life of faith and love of Christ and his Church." 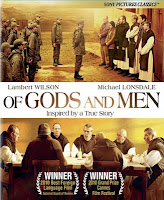 Posted by mother hildegard at 8:02 PM