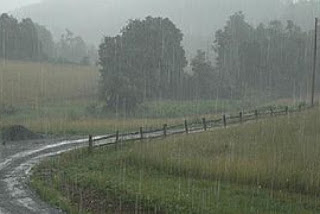 Shaw Islanders are not singing in the RAIN according to our Fire Chief, Jon Shannon.  Most people think that we live in one of the rainiest parts of the continental USA.  Our Islands are in what is called the Banana Belt, which means we get less rain than the mainland.  But the last few years have been drier than usual.  In January of this year Jon's curiosity led our "Official Shaw Island Amateur Meteorologist" to some eye-opening rainfall statistics, which started in his garden.

“As a gardener I am constantly digging holes in my yard. I always take note of the degree of soil saturation and how deep the soil is wet. A few days before Halloween last year I was planting some trees and dug some holes. I expected the soil to be wet or at least moist, but found instead it was bone dry. It made me curious about rainfall so I started looking into it. I was shocked. At first I thought it couldn’t be right and that I had somehow made a mistake while compiling the data. I double-checked it against the National Climate Database numbers and found that the numbers were correct: 7 inches of rain in 2013!  It just didn’t seem possible.” 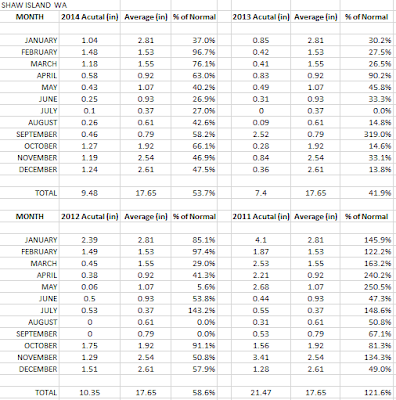 As surprising as those statistics are, there’s another set of numbers that might startle some islanders. Jon also compared the recent actual rainfall to the “long term” average. The set above used the average from 1999 – 2014. The more recent annual average was 17.65 inches. The long term average is 24.97 inches. That makes the recent years look even drier compared to the long term normal.

Is this a look at our future?
The fact that the long-term average of 24.97 inches per year has fallen to 17.65 inches per year in the new millennium is pretty astounding. Weather is fickle and who knows what the future will bring. It’s certainly nothing to panic about. Compared to Texas, California and the Southwest, this is nothing. But  times are changing and we could be  heading into a different climate regime as many experts suggest.
But compared to most places in the USA, our island is still a green paradise!
Information: Shaw Island Website  (Sharon Wootton)
Posted by mother hildegard at 2:48 AM