A BENEDICTINE NUN IN ADVENT 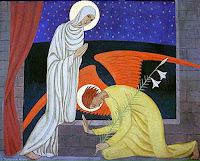 DAME WERBURG WELCH  was born Grace Eileen Welch on 17 May 1894 in    Her father was raised Protestant, but converted to Catholicism after reading Cardinal  (St.) John Newman's works.  Eileen studied at Southampton School of Art and then at the , when the family settled in .

In 1913, Eileen entered the Convent of the Religious of the Cross as a postulant, before becoming a novice at Stanbrook Abbey (Benedictine) in Worcestershire in 1915.

On 30 November 1919 she took her solemn vows and became Dame Werburg. She intended to give up art, but was persuaded to continue extending her scope to vestment designs and wood-engravings for the Stanbrook Abbey Press. She studied under Desmond Chute and Eric Gill from whom she derived her angular style.

After her paintings, vestment designs and wood-carvings received favorable reviews at exhibitions of the Guild of Catholic Artists and Craftsmen in the 1930s and 1940s, commissions came in from churches and private individuals all over the country. Her illustrations appeared in contemporary Catholic magazines.

Like a true Benedictine nun, her art had to be fitted in with attendance at the Divine Office, as well as the manual work of the community. Over the years she served as chantress, portress, and assistant sacristan, as well as being subprioress from 1956 to 1968.

During the war she volunteered to take charge of the orchards and was still climbing ladders in her 80s. She suffered a severe stroke in November 1989 and died the following February at the age of 95. 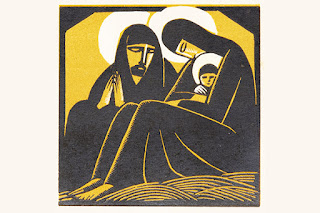 The National Art Library at the and has an information file on the work of Dame Werburg Welch, containing a brief biographical outline and a collection of wood-engravings and linocuts, with some contemporary photographs of carvings and paintings. Photocopies of working drawings are included. Another collection of her wood engravings and other prints forms part of the Stanbrook Abbey Press.

Posted by mother hildegard at 11:30 AM