AN ANGEL FROM MEXICO

ANGEL ZARRAGA  was born  in 1886 the son of the physician Dr. Fernando Zárraga and his wife Guadalupe Argüelles in the Barrio de Analco of . While attending the Escuela Nacional Preparatoria in Mexico City, he made his first contacts with the prevailing artistic and intellectual scene, and later studied at the Escuela Nacional de Bellas Artes. 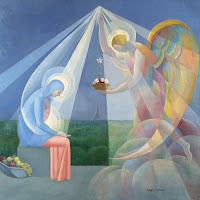 Following his studies and with the support of his family he left for where he would remain for over thirty years. While in he painted murals in the of and, in 1927, decorated the Mexican Legation in .

He visited and exhibited in  Spain, France and Italy.  He also visited courses at the Royal Academies for Science and the Arts of Belgium.

In 1906 he exhibited some of his pictures in the Museo del Prado, and in 1907 in an exhibition of the ENBA. He participated in the 1909 Biennale di Venezia and exhibited in the Salon at the Piazzale Donatello, Florence. In 1911 he moved to for good, and he only returned to once at the outbreak of World War II for a short time.

From 1914 Zárraga painted in a Cubist style but after 1921 his work was influenced by Cézanne and Giotto.  Zárraga breaks from representational painting by identifying spheres and cones of light rather than two dimensional planes. The formal composition is further enhanced by the use of bright blues, greens, yellows, and reds. Each field of color thus represents a separate plane.

As a result of the collapse of the international art market he lost his sponsors and became depressed. During World War II he returned to his home country in 1941, where he painted murals at the Club de Banqueros and in Monterrey Cathedral.

He died of pneumonia in 1946. A museum of contemporary art in is named after him. One of his paintings sold for almost a million dollars in 1998.   I could find nothing about his personal life, his family, or his religious practices, but from the art works I would say he new a bit Advent.

Posted by mother hildegard at 3:46 PM